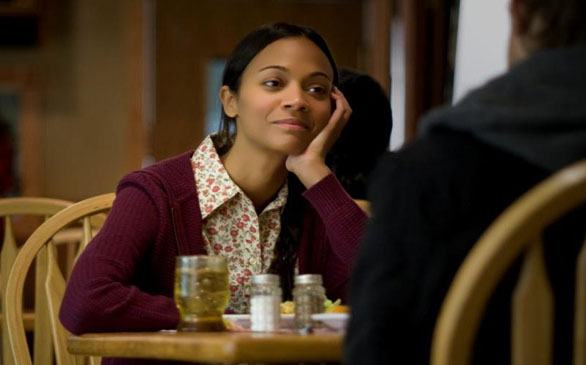 Slagging Angelenos has long been a popular past time. Narcissistic, self-obsessed, shallow and psychologically simple, L.A. dwellers have been providing material for comics and Hollywood comedies ever since Joan Didion crafted the modern Angeleno stereotype in her classic novel Play It As It Lays. They are easy targets, almost too easy. Dismantling the myth of the Angeleno these days is akin to pointing and laughing at a kid with Down syndrome because he shit himself. If you’re going to go for such a cheap out, at least put some thought into it. The travesty that is Burning Palms, the latest directorial effort by Christopher B. Landon, is the cinematic equivalent of the kid with Down syndrome pointing the finger at himself and having an awkward laugh at his own bad fortune, painful to watch and not without some well-placed sympathy from those involved.

The start of the movie is promising. The title, Burning Palms, sets the table for a dry, wind-whipped L.A. tale of turmoil and conflict. One could be forgiven for expecting a well-thought-out tale in a neo-noir vein, think The Big Lebowski or even 2 Days in the Valley. Instead, the credits finish rolling and we are subjected to a series of five absurd and ridiculous vignettes told in a pulp style reminiscent of a suburban Creepshow, Stephen King’s semi-cult movie broken up into similar short pieces. Unfortunately, that’s where all similarity ends.

Running about 25 minutes apiece, each story centers on a different breed of Angeleno: the Westside Yuppie, the Gay West Hollywood Couple, Spoiled Kids from Holmby Hills, the Westwood College Student and a Valley Girl. It’s an admirable attempt to tell an entertaining story, but the short running times leave, what on the surface are real and relevant topics, reduced to bad caricatures with ‘Hunh?’-inducing endings. Add that to poor production design, cheap sets and an overall lack of polish and the look and feel of the production was more high school summer project than Hollywood feature.

To be fair, the last vignette of a valley girl becoming obsessed with her attacker was noteworthy and seemed to be subject matter suitable for a full-length film. In addition, there are some guilty laughs to be had. This is a film by Christopher B. Landon, director of Disturbia, so the talent for gross-out humor is never in short supply. And while the performances were mostly forgettable (except for Zoe Saldana as the spurned valley girl excelling in a roll that dwarfs the film and story), the cringe-inducing role of Shannen Doherty giving it the ol’ college try as a British psychologist is almost worth the price of admission. I said almost.