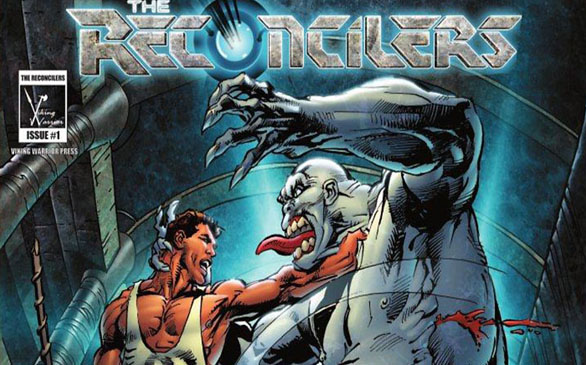 The Reconcilers takes place in the year 2165 after a corporate war brought on by dwindling resources. A single corporation with a messianic CEO has taken over through control of Liberty Ore, the only energy source left, found beneath the moon’s surface. The heroes are a ragtag company of drillers who stumble onto a massive ore find, thus putting themselves in the sights of the powerful corporation.

With nations dissolved, the only court of law is a Running Man-esque gladiatorial arena, where disputes are settled in mortal combat. Now, Sean Hexhammer, a miner with a violent past he’d soon rather forget, is the only hope for the band of outmatched misfits.

At times, The Reconcilers gets bogged down by too much dialogue, with writer Erik Jensen trying to convey too much on a given page, often resulting in postage-size panels crowded together. However, the world Jensen and his co-creators have shaped offers a lot of possibilities, with a timely subject matter at its core.

The Reconcilers is currently available.