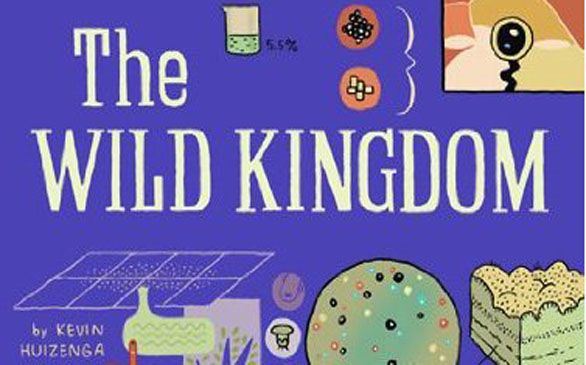 If David Lynch and Rube Goldberg collaborated on an encyclopedia of suburban wild life and then had William Burroughs come in with his cut-up technique, the result might approximate the singular blend of surreal satire, deadpan absurdism and cosmic irony at work in Kevin Huizenga’s The Wild Kingdom.

There is no story per say, but rather an amalgamation of vignettes from the life of suburban everyman Glenn Ganges and his quotidian interactions with squirrels and pigeons. In between, bits of slipstream satire invade reality to take surreal swipes at consumer culture, as when Walt Whitman makes an appearance to hock a “tooth-whitening system.”

You can breeze through this mostly-wordless book for a droll experience, or you can stop, reread and try to puzzle out its construction. Fans of films like Steven Soderbergh’s Schizopolis will eat it up, while others may just be perplexed.

The Wild Kingdom is currently available.