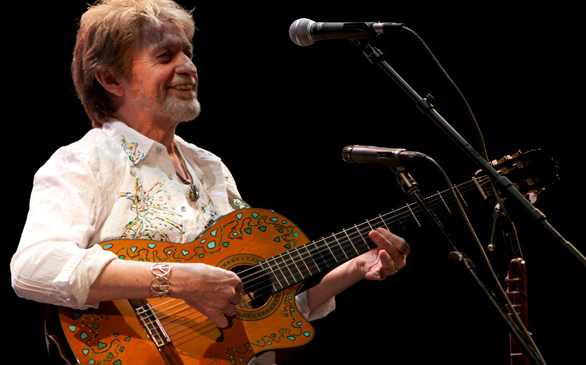 The history of contemporary music goes back for most of us to the classical age, when baroque styles influenced the sounds people moved to in grand ballrooms. Over the years, it changed and made its way into small shacks in the South where blues was born. It spread across European countries in a ska-like beat, and in some places it evolved into its own entity.

For years we have been inundated by sounds that make us feel emotions we weren’t sure we were capable of, and there are a select few that have come across each decade to give us a chance to experience their abilities not only once, but in several incarnations.

Jon Anderson is best known for his work with the band Yes. Their hit song “Roundabout” is a staple of many music classrooms and the plethora of hits rest nicely on rock ’n’ roll charts all over the world, but it’s what this legendary musician is doing now that has got everybody’s attention.

“I work with a couple dozen people by way of the Internet. I’ll sing melodies and lyrics, and we co-create. I’m working with people in Italy, Australia, Romania, France, England, L.A. and New York. You co-create with these people and you don’t even meet them,” Anderson explains. “You don’t all need to be in the same room. I’ve been there; I’ve done that stuff. So why not use modern technology to co-create now? I’ve been freed from the band routine into a larger world of music.”

This idea has been around for years, and in some cases has led to huge success; just look at the Postal Service. And with that idea comes the next level: Anderson’s own Internet radio station filled with artists who have had the ability to collaborate with him and others. His Facebook page has over 20 pieces of music covering a wide range that inspires tons of new musicians, old and young.

This kind of mentality and realizing that the youth are the ones pushing music forward from their souls shows the relevance of a musician like Anderson even 40 years after his first songs hit the airwaves. But it’s not just his insight to work with the youth or use technology to push music further, it’s also the understanding that he doesn’t have to be associated with one type of music.

“Recently I was asked to have my vocals used on Kanye West’s new album. I did it, and it sounds great. People are going to hear my voice and wonder who that Jon Anderson fella is, so I’m happy to see what comes of it.”

It’s that kind of thinking that has allowed Anderson to still be an important figure in music: the willingness to try new things and see what can come from working with artists of all backgrounds.

“You caught me at an interesting time. I’m collaborating with a range of musicians – bands up here in San Luis Obispo and others around the world. We’re trying to do something a bit more adventurous. Keep it upbeat. Like Paul Simon opened up the whole African side of things. There’s so much music out there, there’s so many people out there. You sit and watch people play and it shouldn’t be restricted by record companies, the radio or pop music. That’s a lot of rubbish. They have to make music from their heart.”

It’s a pleasure talking to artists like this. They not only have proved they can create hits, but they still get it. Instead of resting on past success, people like Anderson have chosen to grow and evolve, and in turn, have continued to create something new. To sample a bit of this in true form, pick up the The Living Tree, Anderson’s new album with Rick Wakeman, or his album set to drop later this year titled Survival and Other Stories.