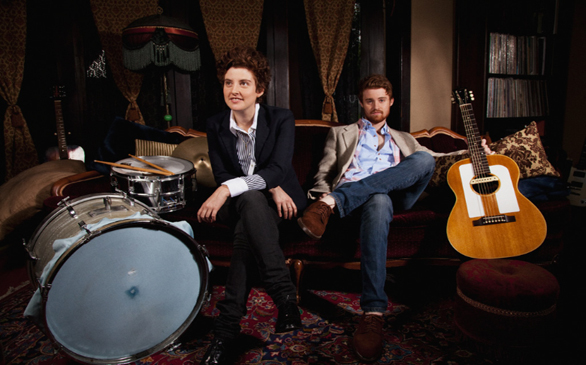 See the Belle Brigade at Spaceland every Monday in January.

Reprise Records has announced that they’ll be releasing the self-titled debut album from Los Angeles’ the Belle Brigade, fronted by siblings Barbara and Ethan Gruska, in April. The pair comes from a musical family (Dad is songwriter Jay Gruska, and grandpa is renowned film composer John Williams.), but they haven’t always worked together; it was just a couple years ago that drummer Barbara picked up a guitar and formed the Belle Brigade with younger brother Ethan. But things developed fast after that as the duo became a staple on the local live scene and then put their all into making the album.

“We didn’t want to make something small and precious,” says Barbara. “We wanted to make something big and exhilarating. Recording this album was an incredible lesson at walking the line between holding on and letting go. Every note is intentional, but we gave up the reins to let the music go freely where it wanted to go. We wanted to make a record that was personal and aching but still uplifting, relatable and fun to listen to.”

You don’t have to wait until April to hear some of the new music; the Belle Brigade appears live at Spaceland every Monday night through the end of the month.

Lynch Has a Good Day

Legendary film director David Lynch (Eraserhead, Blue Velvet), who has composed music for his films in the past, is about to release two singles featuring himself on vocals and production duties. Sunday Best Recordings releases Lynch’s electronic single “Good Day Today” on Jan. 31 along with a “narcotic blues track” called “I Know.”

Lynch has also allowed a handful of notable producers to work their own magic on the tracks. Remixes from Underworld, Simon Ratcliffe from Basement Jaxx, Sasha, Skream, Boys Noize, Jon Hopkins, Diskjokke and Rob da Bank drop on the same day.

The lineup for this year’s AP Tour has been announced, and Hollywood band Black Veil Brides are getting top billing along with Destroy Rebuild Until God Shows, a Michigan-based outfit whose name can be cleverly abbreviated as D.R.U.G.S.

Richmond, Virginia’s Conditions, touring behind their recent release Fluorescent Youth, VersaEmerge and I See Stars round out the acts set to appear when the AP Spring 2011 Tour rolls into the Hollywood House of Blues March 23 and the Glass House in Pomona March 24. Tickets go on sale Jan. 15.

Cobra, Foxy Brown, Ninjaman, Tiger, Bushman, Lexxus, Sean Paul & Mr. Vegas and Reggie Stepper are just a few of the other acts contributing. A bonus DVD showing Steely and Clevie at work in the studio in 1988 and with newer interview footage is also included in the package.

“It feels great to hate you!” That’s just one of the sentiments you’ll find expressed in the new line of black metal greeting cards created by Dark & Somber Greetings, a Los Angeles-based greeting card company helmed by designers Farron Loathing and Courtney Frystak.

Eleven different cards are currently available, each featuring grim but not gory artwork, and carrying greetings such as “Another step closer to the grave,” “If I had a heart I’d give it to you,” “I’m sorry for being born” and “Thanks for nothing.” Cards cost about $4 each or $17 for the set and are available at etsy.com.

Speaking of black metal, Peaceville Records is getting ready to re-release the Goatlord and Ravishing Grimness albums from Norwegian metal duo Darkthrone, and they’re calling on fans to create new artwork for the now-classic albums.

Contest details can be found at peaceville.com, and the label is requesting that only serious contributions are submitted. Competition ends Jan. 31.