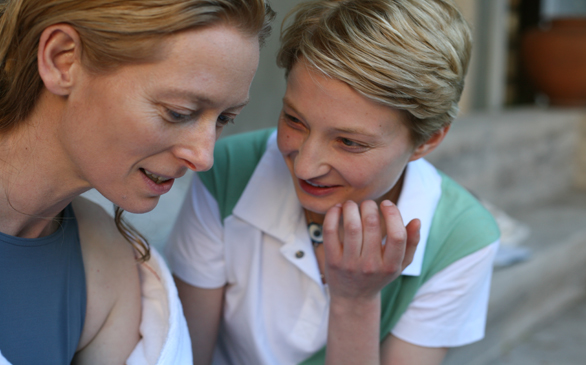 Italy’s I Am Love screens Jan. 13 at the Aero Theatre.
(Credit: Magnolia Pictures)

Screw the resolutions television ads inflict upon our conscience. I don’t have any habits I’d like to change, but thanks again Weight Watchers for that tempting offer. Even if I did need to join the crowd flooding Gold’s Gym this time of year, I know that hitting up the weights probably wouldn’t happen. You know why? Because the turning of the new year also officially marks the start of awards season, the few months where I have to sit in a dark room or on my couch to catch up on the few films I have yet to see this year.

And what a year it has been. Let’s start with the best of 2010. On my list that I have limited to five (in no particular order): The Social Network, True Grit, Black Swan, The King’s Speech and Inception. If I had to pick my favorite, I think David Fincher’s The Social Network about 20-something billionaire Mark Zuckerberg would win out over all the others. It may not be quite so true to real life, but Aaron Sorkin’s screenplay is genius, and the over-the-top drama is all we want anyways.

I give myself a few honorable mentions this time of year too, so I don’t have to feel like a complete Hollywood snob. Scott Pilgrim vs. the World, Easy A, Let Me In and Kick-Ass are four films that may not have done nearly as well as they deserved. Although it seems to be the age of superheroes and the revamp of teen comedies, these were somehow overlooked by audiences, particularly Let Me In and Kick-Ass, both of which starred Chloe Moretz who rocks as leading lady, even at the tender age of 13.

There were, as always, some really terrible films as well. If I could speak on behalf of audiences everywhere, I would like to officially say that our resolution is to quit making films like Valentine’s Day or The Bounty Hunter. The summer comedy Grown Ups was brought to the big screen only because big names like Adam Sandler, David Spade and Chris Rock agreed to spend a week out of their busy filming schedule to make the horrifying flick and get paid handsomely in the process.

As it stands, I’ve spent the majority of this year complaining about the lack of quality films. Even the fall season produced very few Oscar contenders. As November and December hit, I found my complaints were few and far between, though it was still difficult to get the taste of Vampires Suck and Lottery Ticket out of my mouth.

But my hopes are still high for 2011, our last year to prove ourselves worthy before John Cusack must save us from the apocalypse in 2012. First up, the Golden Globes, which are often viewed as a precursor to the Academy Awards. Many Globe winners have gone on to win the Oscar, so this award ceremony is a big one for nominees in every film category.

If you are like the majority of the American public, foreign films may not be on your radar. Co-presented with the Hollywood Foreign Press Association, American Cinemateque is featuring their “Golden Globe Foreign Language-Nominee Series” through Jan. 15 at the Aero and Egyptian Theatres.

Each night (as of Jan. 11), one of the five nominated films will be screened. Biutiful from Mexico and Spain, The Concert from France, The Edge from Russia, I Am Love from Italy and In a Better World from Denmark are the five nominees and five excellent films that should make it on everyone’s list of the best of 2010.

The week of foreign films will culminate on the afternoon of Saturday, Jan. 15, at the Egyptian Theatre in Hollywood for the Golden Globe Foreign-Language Nominees Seminar. The event includes a free roundtable seminar with the directors of the five nominated films and is moderated by Mike Goodridge of Screen International.

So instead of investing in that gym card that will only collect dust in the center compartment of your car, get a little culture and prep for the next few months of filmic glory. I don’t need to be told twice.