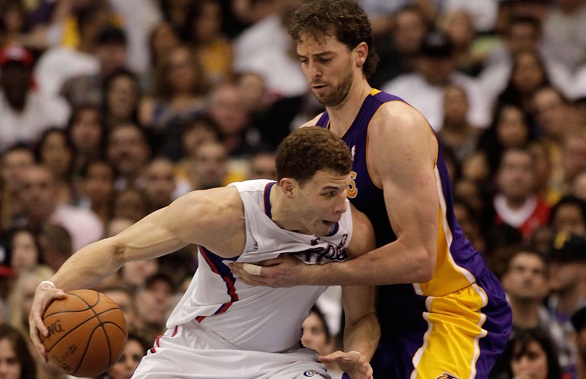 Perhaps the best thing that happened to the Lakers Sunday afternoon in their 99-92 defeat to the Clippers was having Dodger Matt Kemp sitting behind their bench. Other than that, the Lakers simply lost a game they should have won.

Now 30-12 and with the fourth best record in the NBA, the Lakers are in the midst of figuring out what went wrong in their affair versus the Clippers. Forward Blake Griffin did not experience his best game from the beginning because of the Lakers’ ability to shut him down, but he still managed to be an integral part of the Clippers’ win. More importantly, he found a way to get into Lamar Odom’s head and thus provoke a confrontation among several players. Griffin, along with teammate Baron Davis, Lakers Ron Artest and Odom were eventually ejected with just seconds remaining in the game.

So, let the rivalry begin. Both teams are 1-1 against each other thus far this season, with the meetings taking place on Clipper hardwood.

“We have a good rivalry,” Clippers guard Eric Gordon tells the media. “We always look forward to playing against these guys, and it’s always real interesting.”

Gordon became an imperative reason in the team’s victory while contributing 30 points on 13 of 20 from the field, six assists and four steals. Griffin, technically a rookie although in his second year in the NBA since being drafted, posted 18 points and 15 rebounds.

Additionally, Davis had 14 points, eight assists and made two steals.

“We’re a relentless team,” Davis tells reporters. “We’ve got guys that believe in each other, and we’ve got explosive scorers. This is just another achievement for us, and we’re getting better all the time.”

“We just didn’t put up much of a fight. I’m sure the next time we play them, we’ll be a little bit more ready physically to match up with them,” Bryant tells the press after the loss. “They just took it from us. … Blake just ran through us. We didn’t have anybody that was going to put up a stand.”

Pau Gasol chipped in 13 points and eight rebounds, while Artest and Odom each collected 10 points. However, that was not enough on a day that the Clippers seemed to want the win more than the Lakers. And this showed in the overall result.

The confrontation near the end of the game might very well be a turning point for the Lakers. It is even more important than the loss they suffered due to the Lakers’ lack of physicality over the years.

In the middle of a free throw attempt by Randy Foye, Griffin produced an aggressive effort to receive proper placement on a potential missed free throw rebound. Odom did not like that, which is when he shoved Griffin aside.

“Maybe I overreacted, but I just feel like if you’re up nine, a ram in the back at that point?” Odom remarks. “Any other time, I get it. You play hard, you’re strong, whatever, but the ram in the back while up nine? I don’t get it, so I’m just going to have to react.”

At this point, several players mildly shoved each other under the basket. Davis came running from nowhere to alter the situation, which is why he received an ejection.

“I was just helping my teammate and being a backup,” Davis claims. “People take shots at Blake, and they’ve been doing it all season. … It was just a bunch of lollygagging and arguing, but it wasn’t nothing. It was just playing tag.”

Lakers head coach Phil Jackson did not understand the purpose of ejecting Artest, as the video replays show he acted as a peacemaker in the mild scuffle.

“I have no idea how they make their decisions – whimsically, I think,” Jackson states. “I can see Lamar and Griffin getting ejected, but Ron, it was just ridiculous.”

Eventually, the shoving game mattered more than the basketball game; this could boost both teams’ energy level for the better in the long run.

Heck, even Kemp got excited!