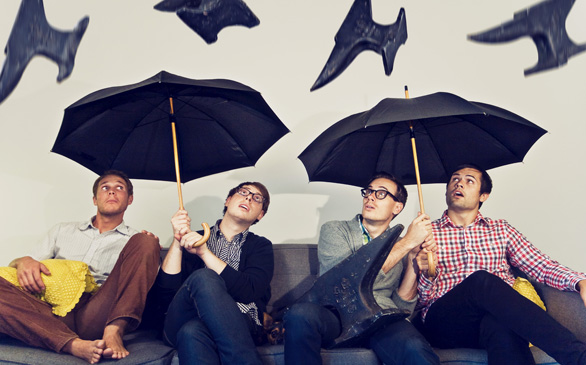 It’s been four years since Hellogoodbye released their first album, Zombies! Aliens! Vampires! Dinosaurs! Frontman Forrest Kline attributes their hiatus to a legal battle with Drive-Thru Records, which prohibited the band from working in the studio for two years. Fortunately, that didn’t mean the creativity had to stop, and once the band broke free of their old label they created a new one called Wasted Summer. Now Hellogoodbye are back with an album, Would It Kill You?, making music on their own terms.

With the power of their music back in their hands, Hellogoodbye immediately set off to Kline’s home studio.

“We were performing new songs for a while before Would It Kill You? was recorded,” says Kline.

Meaning, it wasn’t the lack of material that kept them from releasing new music. It was adjusting to their newfound freedom. There were no more deadlines to adhere to, no more keeping it down because Kline’s parents were asleep and if something didn’t sound right, there was no reason to force it to work. Instead, the band was able to micromanage each song and fix anything that was bothering them. Kline was so dedicated to the quality and sound of the album that he finished up the final details of it while on his honeymoon.

The end result is a surprisingly free-spirited pop record that drifts away from their electronic/dance trademark. That’s because Zombies! was a record made out of necessity, with Kline tediously using Fruity Loops and a sequencer because he didn’t have the means to use anything authentic.

“I remember during Zombies! that the best days for me would be whenever we would go into the studio and record something live. Now that I’ve been able to build my home studio, I can do that. Recording real instruments is a lot more exciting,” says Kline.

Would It Kill You? comes as a breath of fresh air; it’s the album they’ve always wanted to make, and it proves that they know how to play their instruments and not just make beats.

Now that they’ve got their first self-funded album under their belts, Hellogoodbye are ready to start their first headlining tour. They even handpicked the accompanying bands.

“When we were touring with our first album, we were paired with bands that didn’t really make a lot of sense to who we are. Like when we toured with Hanson,” says Kline.

But as to what they’re most excited for on this upcoming tour: “We’re excited for people to have the record and know the songs.”

In other words, the fans.

Hellogoodbye is notorious for their accessibility. They personally mail you merchandise, retweet everyone who mentions them on their Twitter, have a forum dedicated to answering any question you may have for them (no matter how personal), reveal the meanings of each song from their new album (though most are inspired by Kline’s wife, Chelsea) and, as of late, might have been playing at a neighbor’s house near you.

After they finished touring with 3OH!3, the band found themselves with a lot of downtime and decided to spend it by reconnecting with their fans in a personal way. So they set up an ad on their Web site and people wrote in, sending pictures of their houses along with how many people they could accommodate. Playing house shows became so popular that mtvU stepped in with a contest so that yet another Hellogoodbye fan could play host to this event and have it taped for the rest of the world to see. They enjoyed playing house shows so much that they might add a couple more in between the dates of their current tour.

Hellogoodbye always gives you something to look forward to, whether it’s creating a personalized experience, a quirky otter T-shirt, music that makes you happy or challenging you at “Guitar Hero.” Their versatile, DIY ethic makes them stand out in a world overwhelmed with auto-tune and synthesized strings.

As to whether or not they’ll go back to their electronic roots, Kline offers, “I can’t say for sure. I don’t know what the next album will be. Electronic music’s not as enjoyable to make, but I wouldn’t rule it out.”

Would It Kill You? is currently available. Hellogoodbye perform Jan. 22 at the Troubadour. For more information, visit hellogoodbye.net.