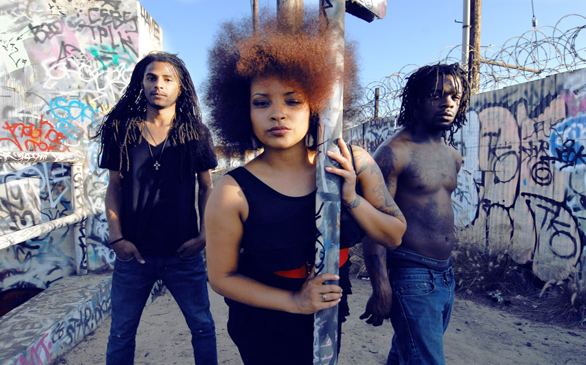 After conquering cities and gaining fans across the nation on tour, The Memorials’ highly anticipated self-titled debut album has finally arrived. The hard rock group experiment with a wide range of fundamentals as they establish their unique sound. They combine every possible element throughout the album by incorporating intense rock combinations and psychedelic guitar shreds.

The album instantly bursts with chaos and destruction as “We Go To War” completely levels everything in its path. Filled with musical aggression and fury, guitarist Nick Brewer and drummer Thomas Pridgen disintegrate their instruments with an amazing introduction. Lead singer Viveca Hawkings completes the band as her daring vocals hover over the melodious rampage. “Let’s Party” sheds light on a tamer but still aggressive side of the group. Its highly addictive chorus generates hand clapping and dancing while Brewer excels with various guitar solos. Then, they expose a harmonious aspect of themselves with the song “Real” while Hawkings lyrics motivate and uplift. “Real” quite possibly defines the versatility of the album as it ends with a rainforest sensation consumed with echoes.

Each song is precisely engineered with a clear and crisp finish. Every instrument can easily be identified without dominating one another. One of the most impressive aspects of the album is their control over tempos and momentum shifts. Listening to Pridgen’s overruling drum style and Brewer’s unrelenting guitar approach is inspiring. They consistently battle throughout the album, supplying each other with extreme force. Hawkings expands her vocal horizon with combinations of soul, funk and an in-your-face attitude. She rapidly captures each moment by wrapping herself deep within the music while radiating long and dominating verses.

The Memorials have created a magnificent album that expresses talent across every position. Jam-packed with amazing guitar and drums, this album is definitely worth a listen.

The Memorials is currently available.