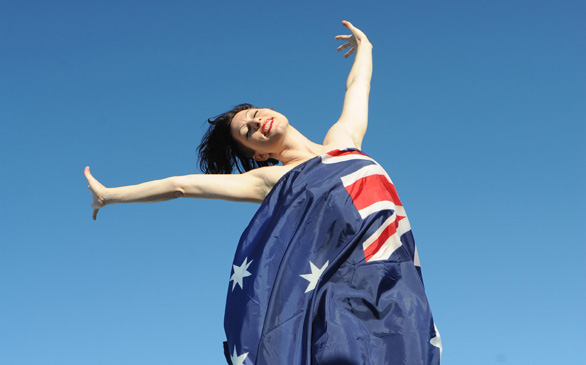 Where does one go after recording a collection of Radiohead covers on a ukulele? In the case of provocateur frontwoman Amanda Palmer, a fight for pubic hair freedom.

Since her days stirring controversy with Brechtian rock duo the Dresden Dolls, the now solo artist is celebrating her newfound success with a sophomore album, Amanda Palmer Goes Down Under. Like the title implies, it was recorded entirely in Australia and New Zealand, ensuring that listeners will get a taste of what havoc the queen of punk cabaret can cause on the other side of the world. The result is undoubtedly one of the most ambitious releases of the year; finally, some much-needed music that easily kicks today’s tiresome pop tracks to the curb.

When it comes to Amanda Palmer Goes Down Under, the singer is kooky and loveable in every way possible, especially when she freestyles about female privates with a playful, reggae crotch-grabbing anthem, “Map of Tasmania.” Listeners still craving some of Palmer’s old-school theatrics will instantly fall for “Doctor OZ.” The dramatic, vintage ballad transports audiences to a Victorian parlor where a “devilishly handsome” fellow (most likely showing off a cape and top hat) isn’t shy of seducing even the most outlandish lady, who fears of contracting an illness that “could be transmittable by mouth.”

Just when you think Palmer is only trying to raise made-up eyebrows, she slows things down with a heartfelt remake of brooding Aussie Nick Cave’s “The Ship Song.” The single is stripped down to the bone, only leaving Palmer’s soul-baring vocals and gentle pounds on a piano, proving she’s indeed a one-woman show. Love or hate her, Palmer is doing the one thing that many artists haven’t done in a long time: breaking rules.

Amanda Palmer Goes Down Under will be available Jan. 21.