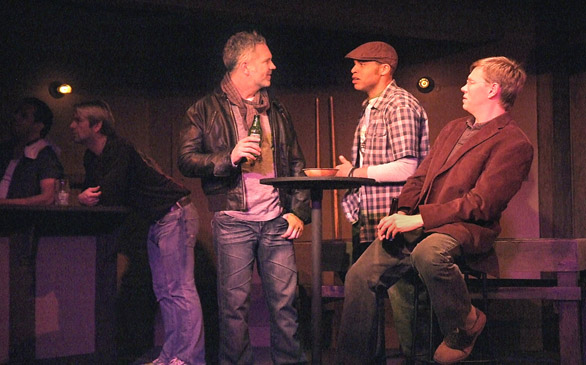 For those who believe homosexuality in males stems from the absence of a man’s father, “Daddy” seconds that philosophy and elevates it to a whole new level.

Colin (Gerald McCullouch, “CSI”) is complacent in his bachelor lifestyle until he befriends an admiring intern Tee (Ian Verdun) who is half his age. Tee’s youth takes Colin back to his days of reckless abandon, and it feels good.

As their relationship grows, Colin’s longtime friendship with Stew (playwright Dan Via) is challenged. Colin might genuinely love Tee, but something clearly isn’t right. And Stew might just be the one to discover precisely where the problem lies.

McCullouch is perfectly cast as the too-cool-for-school yet past-his-prime bachelor. His combination of lovability mixed with a deal of arrogance creates credibility in his character.

Via’s performance is strikingly comical as the over-analytical and cynical friend of Colin, resembling a flattering performance by that of David Hyde Pierce from “Frasier.” His banter with McCullouch is absolutely hysterical and makes you wish these two had a sitcom together.

Via’s script in many ways depicts a complimentary portrait of a homosexual lifestyle, which is commendable. However, there is much buried within the plot, which is disconcerting and simply put, mind-boggling.

Verdun is also engaging as the seemingly oblivious yet extraordinarily talented writer. He definitely keeps you curious about his hush-hush past.

The humanity in the characters’ love and frustrations with each other is touching. The plot and the characters unveil more impressive levels than the actual stage setting suggests, as you will notice (and be impressed by) immediately upon arrival.