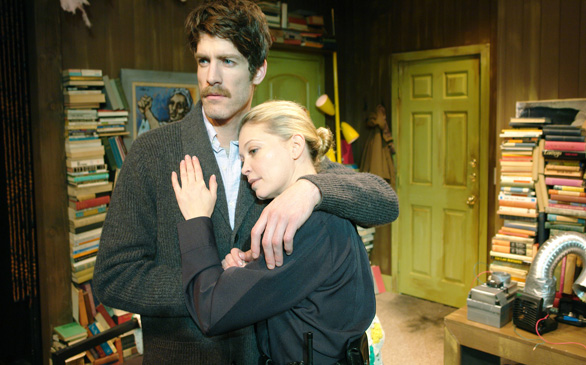 We’ve all received an e-mail – or a dozen per day – from complete strangers asking for money. While most have the sense to ignore such a request, the characters in Karl Gajdusek’s “greedy” just can’t help themselves.

When Keira (Maggie Lawson of “Psych”) interferes with her brother Louis’ (Brad Raider) marriage with Janet (Amanda Detmer), the root of all evil stands at the forefront of all the characters’ problems.

Keira has a history as a pest hounding her brother for money, or more accurately, his wife Janet’s money. This time, she has gone too far. Keira plans to scheme Paul (Kurt Fuller), a generous doctor whom she finds online.

More greed unfolds as Paul’s bombshell wife Tatiana (Ivana Milicevic) will stop at nothing to get a baby.

Gadjusek’s script is genuinely bracing. The story hasn’t been told before (which is utterly rare these days). The characters are individually as stereotypical as they come, but their unusual placement together is brilliant.

Lawson demands attention as Keira, and you can’t keep your eyes off of her. Perhaps it’s because she reveals her flawless body by shedding clothes just seconds into the opening scene, or maybe it’s just her reckless and happy-go-lucky attitude that is absolutely enviable.

Regardless, Lawson is stunning in her role, as is Fuller as Paul. He’s funny, charming, endearing, sincere and everything you wish your dad to be – well, almost.

Detmer is full of funny as the wife who lovingly refers to her husband as “dude.” Her depiction of a straight woman suffering lesbian symptoms is hilarious, albeit disturbing.

Depending on how greedy you are for laughs and a good night at the theater, you should check out this show.