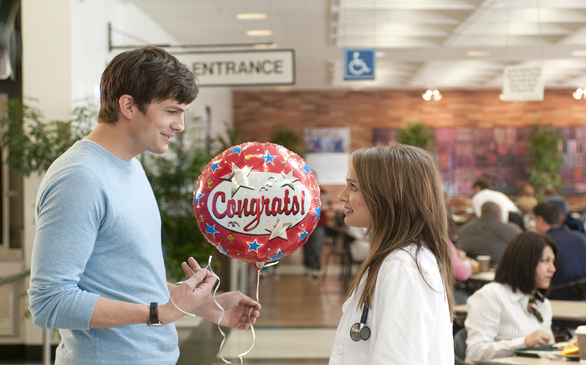 Not to be confused with the ’N Sync album of the same name, No Strings Attached is a new film starring Natalie Portman and Ashton Kutcher as a pair trying to have a relationship that’s purely physical. Directed by Ivan Reitman (Ghost Busters, Dave, Kindergarten Cop), the movie is part of a trend toward a more in-your-face brand of romantic comedy previously seen in Going the Distance and The Ugly Truth and, just as Drew Barrymore and Katherine Heigl did in those films, Portman produced and stars in No Strings Attached, a project she calls a “palate cleanser” after her intense journey bringing her acclaimed Black Swan performance to the screen.

Settling into her seat at the film’s press conference, her burgeoning baby bump pressing against a coffee-colored Jason Wu mini dress, Portman says, “It was pretty great after all of that discipline and focus [to go from] a very serious kind of set to a really playful, fun – obviously everyone is still very professional on this movie, but there’s an improvisational feel all the time and everyone is there to play. It was a really great atmosphere. And I didn’t have to workout because I was like, ‘She’s a doctor. They don’t have time.’”

Producing gave Portman new insight into a craft she’s been entrenched in since her big screen debut at the age of 13 in The Professional.

“It was a really exciting process to get to be involved for the first time so early, working with [screenwriter] Liz [Meriwether] and Ivan. I came on a couple of years before the project [got off the ground], so to get to watch their process and to get to talk to them about the script, they were definitely controlling that process, but it was fun to be included in the evolution of the script and seeing how it changed, why it changed and to have Ivan’s expertise. To learn those things through the process was really exciting.”

Adding to the learning experience, No Strings Attached marks Portman’s first leading role in a romantic comedy, if you’re willing to discount her outstanding appearance as the unobtainable, improbably eloquent next-door neighbor who’s too young to be wooed by Timothy Hutton in 1996’s Beautiful Girls.

Since Kutcher is old hat at the genre, when asked if he helped show Portman the rom-com ropes, he blushes and shakes his head.

“I learned more from Natalie in one day of being on set together than I can ever possibly teach her in a billion years,” he assures. “She may not have done a rom-com before, but she’s done so much work on so many different levels. I don’t know that there’s anything I can really teach her.”

What Kutcher does hope he can impart is the message to audiences that women should be empowered in their sexuality in the way Portman’s character is in No Strings Attached.

“One of the interesting things in the sex education process in schools, the one thing that they teach about is how to get pregnant and how to not get pregnant,” Kutcher points out. “But they don’t really talk about sex as a point of pleasure for women. The male orgasm is just right there and readily available to learn about because it’s actually a part of the reproductive cycle, but a female orgasm isn’t really talked about in the education system. Therefore, part of that, as a spinoff, creates a place where women aren’t empowered around their own sexuality and around their own sexual selves. So from a purely entertainment point of view, to create a movie with a female lead that is empowered with her own sexuality I think is a really powerful thing. If we can give teenage people something to think about from a sex perspective I would say that it would be to start opening up a conversation where women are empowered with their own sexual experiences from an educational level as well as an entertainment level.”

“That was good,” Portman grins. “All the girls are like, ‘Yes, yes, Ashton. You’re totally right.’”

Asked about the basic tenant of the film and whether a friendship can survive sex, Portman wrinkles her nose and throws the question to Kutcher.

“I wouldn’t know,” he shrugs. “I haven’t been fortunate enough to try one of those relationships out. I really think that whoever you’re with ultimately needs to be your friend. All the really successful, happy relationships that I know of, the people are friends anyway. And I don’t know that sex always has to have feelings, but I think that friendship always does, so if you’re friends you’re going to have feelings of some sort, some layer, some level of a deeper feeling.”

No Strings Attached features very frank depictions of sex, both in action and dialogue. Kutcher and Portman’s first sex scene is utterly unflinching, held in a static medium two-shot which leaves only what’s south of the camera angle to the imagination. There are no cuts or soft focus fades, because, Reitman says, he “didn’t want to do anything particularly romantic and filmic. We tease their relationship for the first 10 or 15 minutes of the film’s preamble and here’s this first moment that these two characters are going to be together. This is a movie that really starts with them having sex and then sees what that relationship is going to evolve into. I just really believed in their chemistry. I believe that you can see it right here, just watching them. I thought, ‘Well, I have something really powerful here.’ They’re clearly exciting to look at together and in every form there’s something lovely about it, and I just made it easy. I thought there was something much more powerful about watching really close their facial expressions than trying to go for anything else. By just sitting on it for a while and letting it go a little longer than maybe is comfortable would sort of give it the power that it deserves.”

As for filming that scene, Portman says, “I think the nice thing was that we did the scene pretty deep into the shoot so we had already [become] as comfortable as you can be in that scenario.”

“I was wearing sweatpants,” Kutcher deadpans.

“I was not,” Portman laughs.

When it comes to sex scenes, Kutcher adds, “I think you’re always waiting, wondering when the word ‘cut’ is going to be said. You’re there, and you’re doing the scene and you’re like, ‘OK. Are they going to call ‘cut’? How far are we taking this?’ I’m sure that every actor says it, but it’s always very technical because you’re trying to show each other’s faces and yet stay in the moment. It’s always slightly more complicated than it is in real life. Ivan would come back and say, ‘I think you need to orgasm sooner.’ So your male machismo is like, ‘No, no, no! It would take me much longer than this.’”

No matter how professional they are, filming a sex scene can be an utterly bizarre job requirement for actors. Although people might expect that she’s been desensitized after her role as an exotic dancer in Closer or her widely hyped liaison with Mila Kunis in Black Swan, Portman giggles at the mere mention of an on-camera roll in the sack.

“I’m pretty immature. So I think I get pretty embarrassed easily,” she admits. “I would check out certain shots once in a while to make sure that I felt OK. There was one of the panties coming off that we did, and after I watched I was like, ‘Oh, that’s not bad,’ because it was really quick, and it wasn’t lingering on anything that I felt modest about.”

Keeping the mood light with your co-star also helps, she says.

“You sort of go the opposite direction between takes, like, ‘So, what are you doing this weekend?’ Totally benign conversation between to make it a little normal.”

“I just start by apologizing,” Kutcher reveals. “You sort of try to set some ground rules and apologize for them. Someone told me, and I’m not sure who the actor was – I think it was Sir Laurence Olivier (when in doubt, use Sir Laurence Olivier) – I think he said something to the effect of, ‘I apologize if I get aroused and I apologize if I do not get aroused.’ But there’s sort of always that kind of awkward state of, like, ‘Is this OK. Is that OK?’ Then in between takes it’s like, ‘Let’s act like nothing happened.’ Then you see how good of an actor you really are.”

Interviews
Mary McNamara: After losing a child, 'Pieces of a Woman' filmmakers channeled their grief into art
92 views