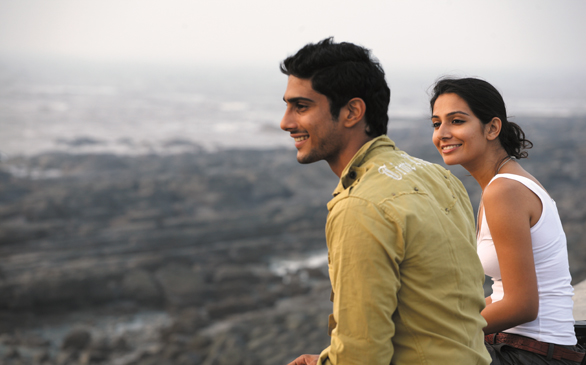 In India, it is common practice to send out your laundry to be washed in an open-air facility where your clothes are beaten on a large stone. The title of the new film Dhobi Ghat (Mumbai Diaries) refers to these laundry places, particularly the largest one, a tourist attraction in Mumbai.

The film follows the interconnected lives of a handful of people. Arun (Aamir Khan), a painter, meets and has a one-night stand with Shai (Monica Dogra), an Indian-American who develops a crush on Arun. They have a mutual acquaintance in Munna (Prateik), the dhobi (clothes washer) who coincidentally washes clothes for the both of them. When Munna fixes a bad cleaning job on Shai’s shirt, she befriends him, and he falls for her. Meanwhile, a fourth character, Yasmin (Kriti Malhotra) is introduced through a home video that Arun finds when moving into a new apartment. He finds inspiration in her “letters” to her brother, documenting her move to Mumbai as a young bride.

Obviously, romantic entanglements abound in the film; Dhobi Ghat weaves the characters’ lives together in the crowded and oftentimes claustrophobic city of Mumbai. The film is held up by the underpinnings of the romantic Bollywood genre, although it does not have the flashy-bordering-on-garish style like that of some traditional Bollywood cinema. What it does have is a firm emotional hold on the audience, causing the viewer to become invested in the characters’ lives and feel what they are feeling. This is an accomplishment of the writing, directing and acting, some of which was done for the first time (in the case of Dogra and Malhotra). The viewer shares the exhilaration of the first prangs of love and the heartbreak of letting that unrequited love go. There is inspiration sparked by a person with youthful hope and wide-eyed wonder; this inspiration then crashes when it is found that the hopeful person is irrevocably damaged.

The English subtitle of the film, Mumbai Diaries, refers to the way the film also acts as a portrait of Mumbai, as seen by residents of the city. The dichotomy of the city is well documented, from the gleaming white walls of upscale apartments perched high above the streets, to metal shacks that rattle with each passing of the train. Dhobi Ghat is a great introduction to Mumbai as well as a tasteful rendition of Bollywood themes.