Sail Away the British Way: Fred.Olsen’s Fresh Accent on Cruising 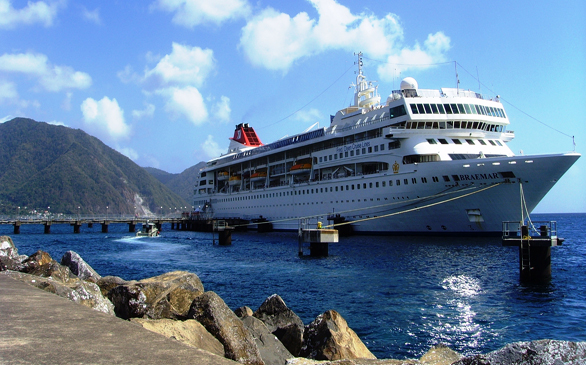 I say, old chap, we’re having a jolly good time, wot? What? OK, people from England don’t actually speak like that, and they generally don’t sound much like the Geico gecko, either. But there’s something very appealing about the British accent, something you’ll find out very quickly when you step aboard a Fred.Olsen cruise ship, and I’m not referring only to the way people talk. Fred.Olsen is a British company, and most of the folks who cruise with them are from the U.K.

When I sailed the Caribbean aboard the company’s Braemar, a smallish ship with a passenger capacity of around 900, there were fewer than 10 Americans aboard. That meant that before we even docked in exotic ports like St. Kitts and the British Virgin Islands, I was immersed in a different culture. Not exactly “pip-pipping” and “cheerio-ing;” more like enjoying a fine British ale, looking forward to tea time and chatting up folks from London-Town and beyond.

The event does start in a bit of a sedate manner as servers make sure everyone has a hot cuppa and then others on the wait staff bring around a selection of finger sandwiches. But then the wraps are taken off a huge display of goodies, and it’s on!

Supplies are plentiful, but this is no time to be shy; go ahead and grab a couple of plates and load up on tarts, cookies, rum balls, cakes, scones and on and on. Many of the treats are English specialties that may not be familiar to you, but the Braemar’s chefs are on hand to tell you what the ingredients are in that little coconut-covered thingy. Tea is held in one of the ship’s bars so you can have a little something added to your cup if you like, and there’s live music after if you’re not too stuffed to dance.

Having Fun in Port: Fred.Olsen offers cruises all over the world, so you can experience the royal treatment as you sail to Greenland, the Canary Islands, Morocco or even during a round-the-world voyage. My Caribbean trip aboard the Braemar stopped at a string of islands, including Jamaica, the Dominican Republic, St. Kitts, Antigua, the British Virgin Islands and Dominica. Each of these ports has a wide variety of things to explore either on your own or through an organized shore excursion that you arrange on the ship.

I decided to alternate the activity level of my shore excursions, indulging in action-packed adventure one day and then sublime relaxation the next, all the while keeping the British theme intact.

In Antigua, I participated in a thrilling yacht race, cranking the winches, trimming the sails and taking the helm as part of the crew aboard a 40-foot On Deck ocean-going racer, one of the same ships that races from its home port in England to the Caribbean every year. In St. Kitts, on the other hand, I explored the charming port city of Basseterre (where you can find phone booths that look like Doctor Who’s Tardis) and then took a shuttle out to the Clay Villa Plantation House. The property, overlooking the Caribbean and reminiscent of an English garden, is filled with gorgeous vegetation including plenty of fruit trees that attract the local monkey population. After the owner shows you the garden, most of the memorabilia-filled rooms of his house and a small museum housing artifacts from around the world, you can sit and chat with him over a cold brew in his own personal pub. Cheers!