James Blunt: Gets Into Trouble 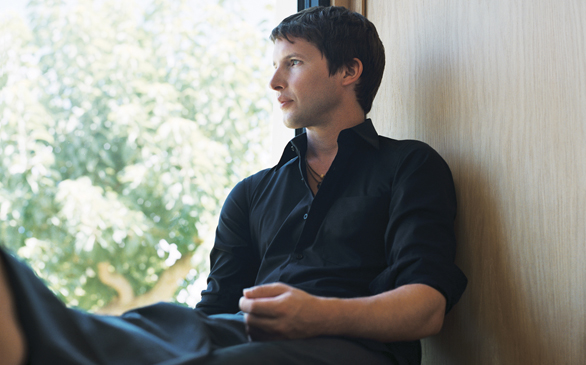 There’s a different musical vibe coming from James Blunt, but he’s still the same unique, humble human being he has always been from the beginning.

Blunt’s newest album, Some Kind of Trouble, releases this week in the United States, and it strays from his previous work.

“I suppose it started differently and with no repetition of the first two albums,” Blunt remembers.

Producer Steve Robson is a predominant reason for the album’s distinct musical production because of his fresh viewpoint.

“My drummer introduced me to Steve,” Blunt says. “We went for a beer, but it resulted in more.”

The five-time Grammy nominee acknowledges that the difference in the new album may stem from the fact that it relates to reality a lot more than his previous tracks. Some Kind of Trouble’s “Stay the Night” is an example of the updated version of Blunt, who co-wrote the song with OneRepublic’s Ryan Tedder.

“I wrote the song along with Steve and Ryan in California,” Blunt states. “It deals with absorbing everything around in California and having fun with friends.”

“Stay the Night” is a sexy, acoustic guitar-driven, upbeat track that is contagious with excitement in any given place and time. One of its lines, “singing ‘Billie Jean’ and mixing vodka and caffeine,” is quite the catchy lyric and could incite a party all by itself.

The video for “Stay the Night” was shot in Los Angeles, where Blunt began his career and made his first two records.

“It is one of the cities I know the most, and I have a lot of friends in L.A.,” he says charismatically. “I like its location, the ocean and weather. What I love about it is that it is shallow because of the fun it has. L.A. is a place of great depth; there are many musicians, mixers, engineers and studios.”

After two albums, two world tours and 18 million records sold, Blunt tackles different subjects and an array of emotions in Some Kind of Trouble, which took a little more than a year to finish.

“The album is melancholic, really. There is a lot of acoustic guitar, and it’s instantly naively upbeat, kind of teenager,” the London-born artist says. “I was in the studio with Steve all the time. There is more animation, and it’s optimistic.”

Widely known for his 2005 superb hit “You’re Beautiful,” Blunt recognizes that the massive amount of time spent with Robson was quite the fulfilling commitment.

“Really, it was properly great fun. His wife was jealous of the time spent together,” he offers. “It is like a marriage because we respect each other, trust each other, treasure arguments and challenged each other.”

Asked about the upcoming world tour, Blunt seems eager to get it started and display his new material to the fans everywhere. This gifted singer, songwriter and musician is bound to continue increasing his universal attention and stardom with Some Kind of Trouble.

Most of the tunes are up-tempo, and Blunt achieves that to perfection, especially with “I’ll Be Your Man.” This is a song everyone will like.

“I was mixing in Los Angeles, and I met with Kevin Griffin,” Blunt says. “He is a really fun dude, and I wrote the song and sounded great. We squeezed [it] into the album because I wanted to.”

Indeed, Some Kind of Trouble is a delightful album, and it even features a personal song from the artist. The now-island of Ibiza resident declares “No Tears” as his milestone of the record.

“As a songwriter, it is a really beautiful and accomplished song,” he asserts. “Behind the song, there is a sense of taking responsibility for one’s own failings.”

Blunt’s given name is James Hillier Blount, and he served in the British Army for four years after college. His 37th birthday is coming up next month.

“I am going to deny it,” he says of the imminent event while laughing. “My world tour is starting in February, so I’ll be in Wolverhampton, England, celebrating it with a couple of thousand people at a concert.”

Rather than hitting the slopes or waves, two of his hobbies and passions aside from music, Blunt and his longtime band mates will be giving fans a show of a lifetime. And Blunt is not ashamed of saying how he feels at the moment.

Some Kind of Trouble is currently available. James Blunt performs May 4 at the Wiltern. For more information, visit jamesblunt.com.