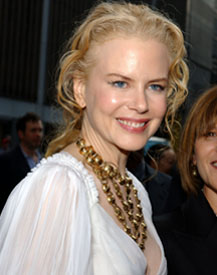 You’d think that after making numerous hit movies and winning an Academy Award, Nicole Kidman could have her choice of roles. But no.

The statuesque Aussie actress jokingly said her nose and the way it moved determined whether she’d be cast as the lead in Hollywood’s latest TV-to-movie adaptation – Bewitched.

Shocked at the assertion that she didn’t actually move her nose in the requisite manner, she said with a laugh: "No, I really do it! I should have been fired if I couldn’t do that."

In director-writer Nora Ephron’s treatment of the classic 1960s TV series, which opens Friday, the setting is a television remake of the series. Jack Wyatt (Will Ferrell), a downtrodden movie actor, resorts to taking the role of Darrin Stephens on the condition that he is able to choose his Samantha. Of course his ego won’t allow him to pick a "name" actress to star as his TV wife, so he embarks on a quest to find the woman with the perfect nose twitch to match Elizabeth Montgomery’s.

Anyone who’s watched that show knows that little side-to-side motion contributed to the comedic moments. He finds Isabel Bigelow’s (Kidman) perfect proboscis in a bookstore and gets her hired. What he doesn’t realize is that she actually is a broom-flying witch.

The tale was in the twitch, but the original TV series was also popular due to Montgomery’s likability. After all, they were able to replace Darrin five years into the show’s nine-year run.

For that reason, it was important to Kidman that she pay homage to Montgomery, who died in 1995. Luckily it didn’t take much on her part; Ephron did all the work.

"The way Nora wrote the script, she incorporated quite cleverly the series, with them being able to create new characters for us rather than trying to mimic Darrin and Samantha," she said. "We were able to have an essence of them and then set it now."

Isabel is a witch who wants to be a mere mortal, much to her father Nigel’s (Michael Caine) dismay. Of course it’s not surprising that her character develops feelings for Wyatt, but with Ferrell laying claim to the title of Hollywood’s reigning cinematic clown prince, you’d think that there was some weirdness with him playing a romantic lead. Not true, Kidman said.

"There was something about his eyes that made you just want to be around him," she said. "I kept saying to Nora, ‘This doesn’t feel like I’m working; it feels way too easy.’"

What made it easier: She wasn’t expected to hold back the laughter when it came to working with Ferrell.

"Well, you don’t have to (restrain yourself). When you’re doing a film like this ... you’re almost on the verge of laughter," she said. "A lot of it is about that sense of anticipation and fun within you."

Kidman, with a busy career and motherhood, wouldn’t mind having a few magical powers to help her along in life. What would she do with such powers?

"Now?" she asks with a smile and ever-so-slight giggle. "I think it would be that you were able to be aware of everything your children were up to."

She might also wish for more time. She has two children whom she adopted with actor Tom Cruise during their marriage, and confesses during her interview at the Four Seasons in Beverly Hills that she’s more than a bit tired. But for her it’s been worth it.

Bewitched is currently in theaters.