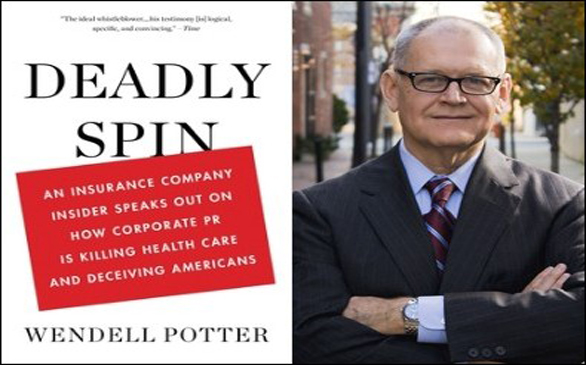 If your head is still reeling trying to make sense of the circus surrounding the health care reform bill, Deadly Spin is the book for you. And if you are one of those Tea Partiers that was so riled up about “death panels,” it may interest you to learn whose dirty work you were really doing.

Wendell Potter is the former big insurance PR exec-turned-whistleblower who testified in front of Congress during the insurance reform “debate” about the industry’s tactics that have led to the sorry state of health care in this country.

Potter traces the long road to reform from Roosevelt to Obama, as well as the history of the spin industry, bringing together these two threads to show exactly how the health insurance industry manipulated half the country into fighting against its own best interest in trying to kill reform.

Potter is most effective in detailing the various Orwellian media tactics PR gurus of all industries employ, from “astroturfing,” the creation of false grassroots front groups (i.e. tea party organizers Freedomworks), to the dissemination of talking points and misleading industry-funded think tank studies to a drowning news media.

Potter is less successful in explaining his decades as a spinmeister and subsequent epiphany. Was he really so naïve to be unaware of the consequences of the nefarious practices he was helping perpetuate? Was he just in it for the money? Potter never really offers any personal incites or a mea culpa, which, although that’s not really the purpose of the book, does become somewhat distracting after a point.

Regardless, Deadly Spin is a vital and timely document. In a world where fact is increasingly being replaced by opinion, and journalists are becoming just amplifiers of press releases, this book should be required reading in schools. It is a time capsule of a country at a crossroads. Either we can continue to cede this country to corporations, or we can take a stand and give it back to the people.