Ip Man 2: Legend of the Grandmaster 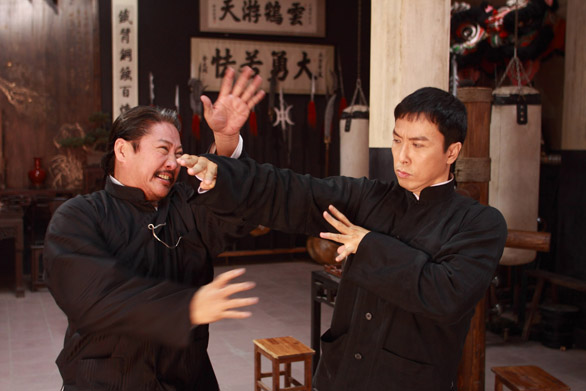 I don’t know much about kung fu films. It’s a big genre. Mastering the minutiae is an endeavor not unlike holing up in a dojo somewhere and perfecting your crane fighting style and figuring out the best way to defend tiger style. People devote entire careers to pinning down the whos, the whats and the wheres and still can come up cross-eyed when it comes to questions like, “What are the best films of the wuxia period?” And, “Who would win in a fight between Chuck Norris and Steven Seagal?” It’s probably more indicative than I would like to admit that my favorite kung fu move is Kung Fu Panda. Really.

Still, you don’t have to be able to differentiate your Way of the Dragon from your Enter the Dragon to sit down and enjoy a kung fu film. All the same rules apply to making a strong film in any genre or discipline. You need a good story, grand visuals, steady technique and a director with a deft hand.

But the thing that separates a kung fu film from just any other film is action and the cast to execute the fighting choreography. If you don’t think so, make sure you stay home when your best friend ditches work to catch the Yuen Biao marathon down at the multiplex or you could find yourself in your own street style version of Fist of Fury.

Ip Man 2: Legend of the Grandmaster is a movie that succeeds because of its casting and its fight sequences. Donnie Yen does an understated job in the title role as Ip Man, developer of the Wing Chun fighting style and, ultimately, the master and teacher of Bruce Lee. Kung fu legend Sammo Hung pulls double duty as the action director for the film and Hung Chun-nam, the foil to Ip Man, and is the linchpin that makes the film work. His acting is worthy and steady, but it’s his fight choreography that proves to be grand poetry. His fighting sequences are detailed and technical and come quick and fast in a relentless way that leaves you breathless and unconcerned about plot or storyline.

Ultimately unnecessary, but no less interesting, is the storyline involving a British prizefighter challenging Chinese pride in post-World War II Hong Kong. Played as an arrogant buffoon by a steroidal Darren Shahlavi, “The Twister” Milos seems to serve as not-so-veiled modern characterization. That he suffers a humiliating defeat at the hands of Ip Man also seems a not-so-veiled reference to Chinese humility and solidarity in the face of Western oppression and arrogance. Now, I’m no expert, but that’s the first time I’ve seen world politics injected into a kung fu film not starring Jean-Claude Van Damme.