Bruins Aim to Even Series Against Trojans 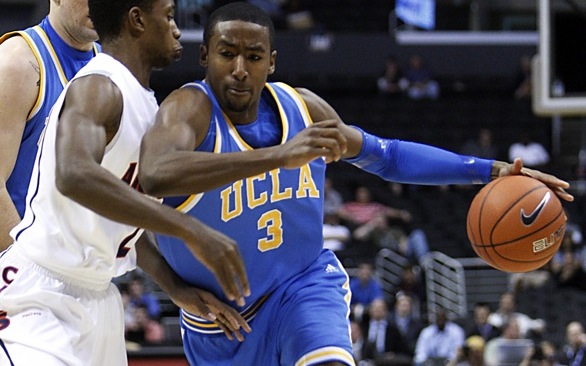 One of the best defenders in the country: UCLA’s Malcolm Lee
(Credit: Luis Sinco/Los Angeles Times/MCT)

After the UCLA Bruins men’s basketball team suffered a 63-52 loss to the host USC Trojans at the Galen Center in Los Angeles on Jan. 9, they garnered a four-game winning streak. USC, on the other hand, is 1-3 after that affair with an overall record of 11-9 and 3-4 in conference play. UCLA is carrying marks of 13-6 and 5-2, respectively, and are currently in a tie for second place in the Pac-10 with Arizona. USC is tied for fifth.

Currently, the Washington Huskies, ranked No. 20 in the nation, are atop of the Pacific 10 Conference.

Two predominant reasons why the Bruins have been solid of late are the production of sophomore forwards Reeves Nelson and Tyler Honeycutt. Both are averaging nearly 14 points and eight rebounds a game. Junior guards Malcolm Lee and Lazeric Jones have been instrumental as well. Lee is posting 12.8 points, while Jones’ 11.5 represents a boost in the scoring column.

In their last win, which came against the Cardinal, Lee completely dominated the stat sheet. He contributed 23 points on 6-of-11 from the field, including two three-pointers, 9-of-10 from the charity stripe and two steals. And his defensive efforts were remarkable. “There’s not a better defender maybe in the country at the wing than Malcolm Lee,” Bruin head coach Ben Howland states.

Moreover, Jones collected 17 points and six boards, while Honeycutt registered 16 points and eight rebounds. What really won the game for the Bruins was defense, however, since they held Stanford to 30 percent shooting. Stanford was 20-of-65.

And what was most impressive is that the Bruins came from a 14-point deficit to defeat the visiting Cardinal (10-8, 3-4), who saw Josh Owens score a double-double of 14 points and 12 rebounds, while Jeremy Green added 12 points.

“They definitely came out and punched us first,” Nelson says.

Play like that can assure the young Bruins’ team many potential wins in their remaining games, but it will not be easy.

“We’re just coming together as a team, and I think we’ll be pretty dangerous if we keep this going,” Nelson adds.

Jones continues, “We’re becoming really mentally tough. When things don’t go our way, we’re out there fighting for each other.”

And this is the mentality the Bruins will most likely have against USC.

The Trojans have not been stellar thus far in conference action, and a victory over their crosstown rival could easily change that perspective and silence critics.

USC’s last contest came as they entertained the Cal Bears, ending in a two-point defeat (68-66) Jan. 22. Senior guard Donte Smith had 24 points to go along with a couple of rebounds and assists. But that did not help the Trojans even though Smith set a career high in points and three-pointers made with eight.

Freshman guard Maurice Jones was the only other Trojan in double figures, scoring 10 points. Three other players had eight points each, while no other Trojan had more than six. The fact of the matter is that the Trojans need more people involved in the structure of the game in order to compete efficiently. A monstrous performance from one of them will not cut it against the Bruins.

To top that off, the Trojans shot 40 percent from the field. However, the Bears recorded a better percentage in 45. This is where junior center Nikola Vucevic comes into play.

Vucevic is the leading scorer while averaging 16 points and 10 rebounds per game, and he has to be highly effective in the paint offensively. A failure in Vucevic’s performance can simply cause the Trojans to be nonexistent with their big men on the attacking end. Junior guard Jio Fontan and senior forward Alex Stepheson are integral parts of the Trojan offense, too.

With the momentum and home court in their favor, look for the Bruins to overcome their earlier season defeat to the Trojans. UCLA and USC face off on Wednesday, Feb. 2, at Pauley Pavilion in Westwood with an 8 p.m. tipoff.