Laid Off, Returning to Grad School 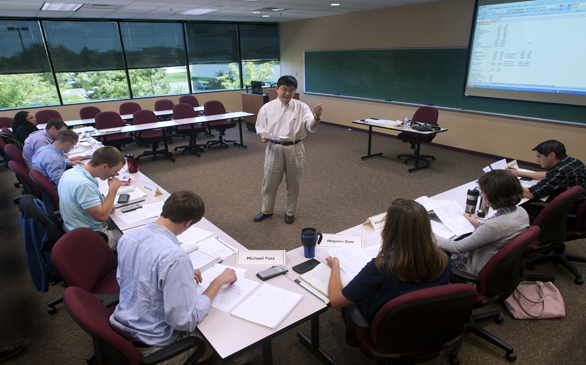 For many laid-off workers, heading back to the classroom is a promising option.
(Credit: Doug Kapustin/Baltimore Sun/MCT )

Many laid-off workers are returning to school to study what they love in order to work in more creative and meaningful careers.

Elizabeth Gist wants to help people in her career and give back to the community; in addition, she wants a career that offers stability and pays well.

“Nursing met those needs,” she says.

She is starting the Cypress College Registered Nursing Program this month working toward an Associate Arts degree.

Gist had already worked her way through college at California State University, Long Beach, earning a bachelor of science degree in Business with a concentration in Finance/Real Estate over 10 years ago. She was working as a senior underwriter in the Subprime mortgage industry making over $100,000 a year when she got laid off in 2008.

“I thought about it for two years, before making a decision as it would be a considerable hardship on my family to return to school,” Gist, a single mother of two, says. “There is no financial aid available to those who already have a degree.”

The Pell Grant only pays for your first bachelor’s degree, says Rose Mennan, an employee at the U.S. Department of Education, Financial Aid Services. “Students have to be very careful in what they major in the first time they earn a bachelor’s degree,” Mennan continues. “Students can get loans for graduate degrees or other undergraduate degrees but not financial aid.”

Despite the financial obstacles, Gist feels going back to school will be extremely rewarding.

“I know the next two years will fly by, and at the end it will be a fabulous experience which will provide phenomenal growth and opportunity for me and my family,” she says.

She graduates in December 2012. The future nurse plans to work full time at Hoag Hospital where she now interns one day a week. In addition, she plans to continue her education working toward a bachelor of science degree in Nursing in an accelerated one-year program online.

Christina Granados feels that going back to school will also pay off for her. She wants a career that utilizes her creativity. She is currently enrolled in the University of Southern California School of Cinematic Arts working toward a master of fine arts degree in Film and Television Production.

“I struggled with the idea of being a student again, but ultimately decided that it was an investment I was willing to make,” Granados says.

Granados feels that she is getting a fabulous experience at USC.

“As soon as I was accepted, I thought, ‘state-of-the-art facilities at a reputable school?!’ How could I say no to that?” she states. “The investment of time and money is no joke, but I love every second of my life, and I’m looking forward to career growth.”

The aspiring director earned a bachelor of arts degree in English with a minor in African-American Studies from the University of California, Los Angeles, in 2007. She was working in publishing at Glencoe/McGraw-Hill when she was laid off in 2009.

“It was the best thing that ever happened to me,” she says about the layoff.

Granados says she was dabbling in her creativity with artistic projects on the side while working at Glencoe/McGraw-Hill. After she was laid off, she decided to follow her creative talents and turn them into a career.

Granados plans to start up a production company after she graduates in 2013. She is now working with a creative and talented group of people that she hopes to continue working with after graduation.

Yet another person I know attends a hairdressing academy in Los Angeles, studying at a trade school and following his creative passion. He is working toward getting a license in Cosmetology, because he wants to be his own boss and more in control of his career.

“I want to use my dedication and creativity to build my own empire,” he asserts.

In addition, he doesn’t want anyone telling him what to do. In 2003, he earned a bachelor of arts degree in Communications with a concentration in Advertising from California State University, Fullerton. He had worked in product marketing in the fashion industry for five years when he was laid off in 2008.

“I didn’t want to get laid off again,” he says.

The hair stylist loves what he is doing now. He plans to be a session stylist after he graduates this year and eventually open his own salon.