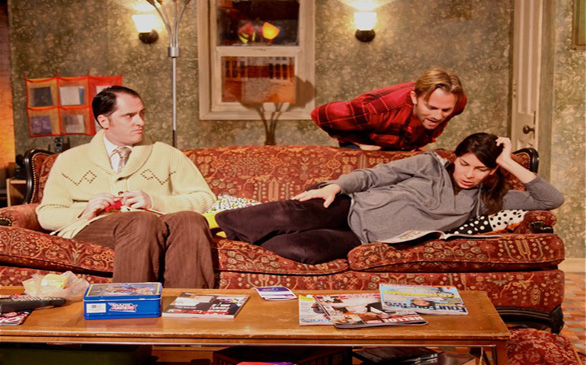 Brendan Hunt, Craig Robert Young and Mina Badie in “Me, As a Penguin”
(Credit: Claudia Unger)

There’s a penguin in the bathtub! Yes, you’re probably as shocked as I was when I heard those words in the play “Me, As a Penguin.” If you assume the title is a metaphor or symbolizes something other than a penguin, you would be absolutely mistaken. The peculiarity of this play is overwhelming.

Liz (Mina Badie) is pregnant and about to pop. As if practicing for her own child, she takes her younger brother Stitch (Brendan Hunt) under her wing after he leaves his mother’s knitting shop. Stitch’s unusual behavior creates trouble for Liz and her boyfriend Mark (Craig Robert Young).

Hunt and Badie’s chemistry as loving siblings works well. The two offer the audience some great laughs, as does Young.

Like a penguin with wings to soar but lacking the means to fly, “Me, As a Penguin” offers amusement but doesn’t quite ever take off. While the four actors are all terrific, the entire length of the show you sit in your seat begging the blatant question: Why are these terrific actors reading this curious script?

When the actors receive a laugh, it is 100 percent for their delivery. Bravo for them for making it work, because Tom Wells’ script could offer more. The play leaves too many pieces of the puzzle missing.