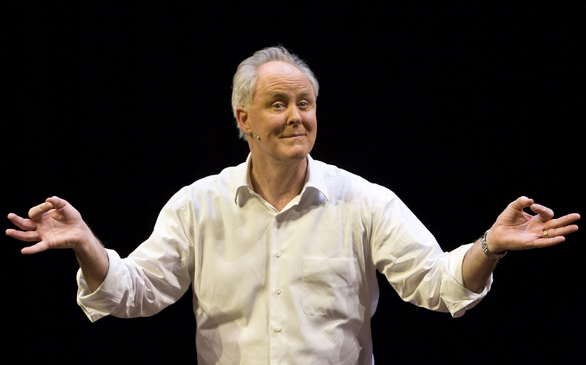 There are few performers who take to the stage with such relish as John Lithgow. The veteran actor of theater, film and television seems most at home – indeed, most at ease – in front of a live audience. It feels appropriate, then, that the setting of Lithgow’s one-man show “Stories by Heart” involves simply a table, chair, lamp and some old rugs, the kind that you might find in the cozy den of one’s private quarters. Oh, and a book. One rough-hewn copy of Teller of Tales, a collection of stories compiled by the late, great essayist H.L. Mencken. From these pages Lithgow has selected the two stories that are featured in each of the evening’s two acts, Uncle Fred Flits By and Haircut.

The significance of these two stories for Lithgow is personal. He rediscovered them while nursing his aged father back to health after a medical procedure. The idea struck Lithgow to read bedtime stories to help calm his father’s anxieties. As Lithgow reflects on the time, he shares some personal and family history.

The third of four children, Lithgow describes a childhood where storytelling was the most constant feature, a kind of religious practice. Lithgow’s parents were traveling thespians whose specialty was producing Shakespeare festivals. Lithgow recalls the adventures of his early family life with a kind of dismay as well as gratitude. He seems to acknowledge that the curious gift of storytelling, which every performer must embody, came to him as a kind of sacred heirloom, one that he is eager to share.

And so the evening is also an ode to storytelling itself and the role it plays in our lives. Lithgow asks more questions then he presupposes to answer, happy instead to let the voice of the stories provide whatever answers there may be for the meaning of storytelling in our lives. This he does with uncommon brilliance, deftly jumping from character to character in Uncle Fred Flits By or fully embodying the vulgarities of the narrator of Haircut.

Lithgow’s art is as much physical as vocal, rhythmic as dramatic. At once he will employ vaudevillian footwork to strut across the stage or utter hideous sounds to capture a moment, but he always shows the good taste of allowing the language of the story to take center stage. This may be the most poignant and tragic aspect of the show, a kind of requiem for a bygone literary culture. For even as the show is a celebration of a rich literary legacy it can’t help but ring a melancholic note at its demise.