The Mechanic: Jason Statham takes Ben Foster under his wing. 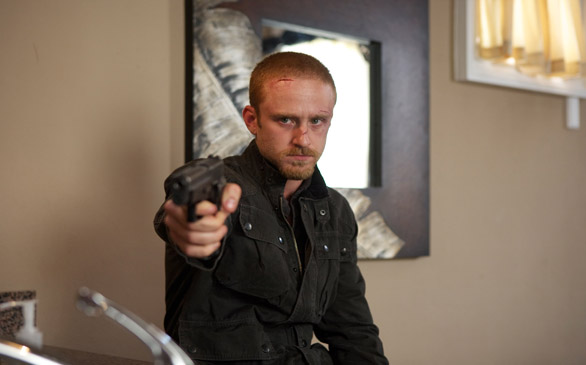 Action movies are like sports cars: the more modern and sleek they are, the better. The producers of the 1972 action film, The Mechanic, realized they had a sophisticated film on their hands. So much so that they decided to give it a sexy upgrade and release it to a younger audience. Despite some obvious changes like the casting of action phenom Jason Statham (The Expendables, Crank, The Transporter), the story remains the same: Arthur Bishop is one of the best hitmen out there, but he’s also different. He’s quiet, cultured and detached. Bishop knows that in order to be effective in his role, he must kill while always making it look like an accident.

When Harry – his close friend and mentor – is ordered dead, Bishop makes it his personal mission to get to the bottom of the attack. However, things get a bit sticky when Harry’s son Steve (played by Ben Foster) turns up out of the blue, seeking payback for his father’s murder. He convinces Bishop to take him under his wing and teach him everything he knows.

For a guy who’s always done his thing without an audience, Steve’s proposition poses a bit of a challenge. However, Bishop likes the companionship and decides to help. Then, faster than you can say “double-cross,” true alliances are revealed, and one of these guys winds up dead.

Unlike a number of remakes that take the basic premise of a film and turn it on its ear, The Mechanic is about as close to the original as you can get. The original screenwriter, Lewis Carlino, was even able to retain his credit on the movie because of the minimal changes to it. His words get a contemporary tuneup through the efforts of Richard Wenk (the film’s co-writer).

The one surprise that The Mechanic does have is its sophistication. Unlike many action flicks and thrillers that are a kick-ass display of guns, body counts and pyrotechnics, this movie relies more on plot, characters and emotion.

Many people who actually remember the original cast members (Charles Bronson as Bishop; Jan-Michael Vincent as Steve) loved the special relationship between the two. Bronson’s Bishop is a lot less rugged than Statham’s, but the underlying themes are still the same. Statham gets the chance to stretch his acting chops and play a man that is lonely and seeking a companion. Bishop’s budding friendship with Steve is a close one filled with a surprising amount of concern and affection, considering both guys are loners. Statham and Foster have interesting chemistry together, which is needed in lieu of the graphic violence that Statham’s movies are known for. Director-producer Irwin Winkler (the other man behind Rocky) says that Statham was a deliberate choice for this reason.

“Jason has such a charismatic quality,” he notes. “He just generates excitement when he’s on the screen.”

In The Mechanic, Foster has the good fortune of being paired with one of the biggest stars of today. The 30-year-old actor has starred opposite a number of well-regarded talent (Woody Harrelson in The Messenger; Christian Bale in 3:10 to Yuma), but has yet to experience a blockbuster hit. His onscreen alliance with Statham is bound to change that. Even Statham notes that their rapport was instant.

“We had a couple of beers, and we spoke about what was necessary,” he says. “There was a natural chemistry.”

As for Foster, he was attracted to the film because the Steve character was just too rich to pass by. He felt protective of Steve as a young man who is a confused loner, seeking a father figure in Bishop.

He goes on to explain that he’s usually pretty casual about which roles he takes on and the reasoning behind it.

“I’m not really conscious about it,” says Foster of his roster of work. “It’s who I get to play with and are there questions that we need to ask.”

When he was first presented with the opportunity to appear in The Mechanic, Foster was dead-set against seeing the first version. His concern was that he didn’t want to “unintentionally borrow” from Vincent’s performance.

His ignorance was also his bliss due to some of the stunts that he’d have to perform. In one scene, Foster has to jump from a tall structure. This would normally be an easy day at the office for other actors, except for one small detail: Foster is afraid of heights. Further complicating matters is that the actor suffers from vertigo. The crew had a little fun at his expense when, right before he was to jump, they fooled him into believing he wasn’t properly strapped into his harness. Still, he was able to complete a series of takes on the stunt after all and now feels proud of himself for having the guts to try it.

“If you’re lucky enough to work as an actor, the gift is to do things that you’re not usually able to do,” he says.

This philosophy was a short-lived one, however. Foster’s character Steve goes home with a gay hitman (for an assignment). Things get a little out of hand, and Steve has to kill or be killed. The scene pairs him with an actor that is 6 foot 5 and built like an ox. It was during the filming of this scene that the actor sustained a debilitating shoulder injury.

“I went home, came back and my shoulder was up to here,” he says, laughing while raising his right shoulder to ear level.

Statham jokes about Foster’s bravado and need to complete his own jumps.

“He’s got a certain-sized ego that will push him past the limits that he’s willing to go,” jokes the actor.

Perhaps Foster felt the need to compete and keep up with his co-star. Statham was, at one time, an Olympic diver. He was also a street salesman and feels that his previous work allowed him to make a successful leap into the creative arts.

“It just gives you a lot of tools to get stuck in,” he says.

The Mechanic, like many films today, was shot on location in New Orleans. This gave the filmmakers a natural landscape that could double for a number of different places without ever having to leave the same town. They cheated three different cities without ever leaving Louisiana.

Co-producer Bill Chartoff named a list of reasons why he loved shooting in the Big Easy: the weather, the tax incentives, the food and the music. The latter figured prominently in the film. Bishop, in both the original and the remake, is an avid music fan. His pride and joy is a classy retro record player and a record collection (No iPod for this guy, thank you!). Still, with a movie that is an even mix of old-meets-new, Statham is just as excited as he’s always been to sign on for projects like this that move him.

The British star will continue to shock his fans by seeking roles that are well rounded in order to flesh out his portfolio of work. He’s next seen starring opposite Robert De Niro and Clive Owen in the dramatic thriller The Killer Elite and also as a shit-kicking gnome in Disney’s Gnomeo and Juliet.

The Mechanic releases in theaters Jan. 28.