The Rite: Prepare to sleep with the lights on. 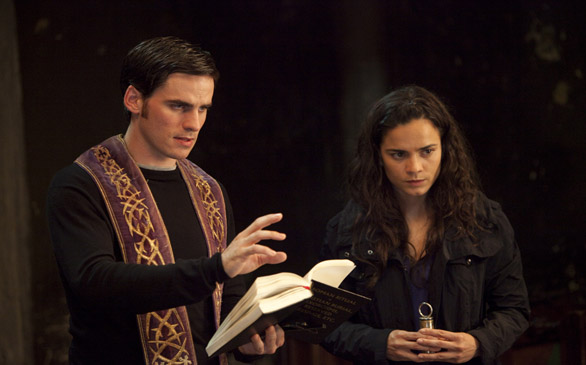 If you were lucky enough to be alive and well during The Blair Witch Project phenomenon, you’ll remember the long lines out the door and around the corner of most multiplexes. You’ll recall the sleepless nights spent with the lights on or jumping at every little creak of the floor and whistle of wind against your windows. That movie – let’s face it – messed up a lot people. Well, for those of you who weren’t around for that one, meet your very own version of The Blair Witch Project.

In The Rite, newcomer Colin O’Donoghue plays Michael Kovak. The handsome, young priest-in-training decides that the calling just isn’t for him. However, his mentor strongly discourages his departure from the Order. He suggests to Michael that he should take a course in Exorcism that the Church will be holding in Rome. A summer spent in Europe – how bad could that be?

Once Michael arrives in Italy, he befriends a stunning Latin journalist named Angeline (played by Brazilian beauty Alice Braga). Michael begins sharing details of his training with her after he meets up with an eccentric older priest named Father Lucas (Anthony Hopkins). It is under his teaching that Michael begins to wander down a violent and frightening path into the afterlife.

Father Lucas has spent so much time trying to drive out the demons of others, that he neglected to deal with his own (literally). Michael soon finds himself knee-deep in some terrifying, unexplained phenomena that prove to be a bigger test than anything he learned back home.

The Rite continues Hopkins’ reign as one scary mutha. His breakthrough role was the villainous Hannibal Lecter in The Silence of the Lambs. As Father Lucas, Hopkins is far less dubious, but equally engrossing. He steals nearly every scene within the film’s climax, but still has no idea why everyone is so frightened of him.

“I don’t know,” he says. “I guess I seem to have a knack for [being scary]. I guess people just think I’m a scary person. My wife’s not scared of me. I’m scared of her.”

O’Donoghue, however, was greatly intimidated by his costar. The 30-year-old Irish actor has been a fan of Hopkins’ work for years. Adding to his nervousness was the fact that The Rite was his first feature film.

“I had a few meetings for this [film], and I tested with Tony,” he says. “I thought, ‘Even if I’m acting with Anthony Hopkins for 30 minutes, it’s still good.’”

Just as thrilling as the audition process, being on set made O’Donoghue even more humble.

“It was just an honor to get the chance to work with the caliber of actors on my first film,” he says. “As an actor, it’s sort of hard to think that you’ll work opposite someone who’s such a master classman.”

O’Donoghue’s family – who have supported him during his years of creative struggle – were absolutely thrilled with news of his success. Although the actor hails from an Irish Catholic background, his family had very little judgment about the subject matter of The Rite.

“My family weren’t that strict, not my immediate family, anyway,” he says. “Everyone was just delighted I got a part.”

He then jokes that he went out and celebrated the news of his casting in true Irish fashion.

“I got drunk,” says O’Donoghue.

BASED ON TRUE EVENTS

One of the claims to fame that a lot of contemporary films have is that they are “based on true events.” This disclaimer has graced a number of movies like The Last Exorcism and The Fourth Kind. The Rite also shares this distinction. This daring and spine-tingling film is based on a book called The Rite: The Making of a Modern Exorcist.

It chronicles many of the events shown in the film and also introduces the world to Father Gary Thomas, the priest on whom the Michael character is based. Father Gary was an exorcist for four years and now presides over a congregation located just outside of Santa Cruz, Calif. He absolutely recognizes the attraction that most people have to the shadow side of life and thinks the curiosity is normal.

“People are drawn to the tragedy,” he explains. “I think we’re just made that way.”

The Rite has a prevailing theme within it about whether or not there are really demons in the world. It forces the audience to believe or to be skeptical. As for its cast, they are just as on the fence as the characters they play.

“I don't know what my beliefs are about any of it, really,” says Hopkins. “The problem with skeptics and atheists is that we never really know the truth.”

O’Donoghue engaged in hands-on training for his role by attending a few exorcisms. The practice has been banned for years in Ireland, so he had to rely largely on his research to play Michael Kovak. He was surprised to see the casual nature of many of them.

According to O’Donoghue, most exorcisms are not the bloody affairs seen in movies where somebody’s head rotates while they spew pea soup. He likened them to someone going to their local physician for a checkup.

“I went to a couple of exorcisms in Rome. I think the level of faith the people have is fascinating,” he notes.

The Rite is incredibly stylish; everything from the locations to the shot details to its cast are visually stunning. Watching O’Donoghue play opposite his female co-star Braga has caused some critics to speculate whether there is an underlying romance between Michael and Angeline. During the film, the pair’s initial introduction is so rife with sexual tension that it even elicits the stink eye from an on-looking nun.

However, Braga and O’Donoghue shoot down any talk of their characters being in love. They especially play up their newfound sibling-type feelings for one another in real life. O’Donoghue has been married for a little under two years. Braga speaks of the actor in only the friendliest of terms. She was pleased when the director (Mikael Håfström of 1408 fame) found her leading man because the search for one had been exhaustive. O’Donoghue remembers fondly her first words to him on set.

“‘Congratulations! I’ve been waiting for ages for them to cast you!’” he says, smiling at her.

“And now he’s my brother!” she jokes.

Hopkins and O’Donoghue share a lot of common ground, not only as actors, but in their personal interests. Hopkins is a renowned artist and musician who has been playing piano since he was 6 years old. O’Donoghue’s musical aspirations lie within his band, the Enemies. He’s the group’s guitarist and says their sound is a bit of a funk-rock hybrid. The Enemies got a leg up on the Hollywood scene when they were asked to play at The Rite’s wrap party. Although music is O’Donoghue's pastime, he says of the gig: “It was great fun!”

As for Hopkins, working with his young co-star was a pleasure. The veteran actor is known for his generosity on stage and screen. He even had a little fun at his expense. Early on, O’Donoghue delivered his lines during a key dramatic scene and without missing a beat, Hopkins turned to him and replied, “Is that the way you’re planning on playing the part? It’s your career.”

The Rite releases in theaters Jan. 28.