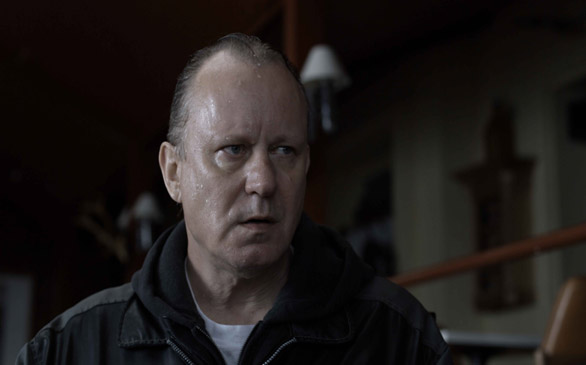 The redeeming qualities we give to gangsters are just a funny side effect of our psychosis. It’s a movie, you know, so the reality of the situation it portrays is not often brought into the discussion. It doesn’t even enter our thoughts sometimes, and we can go on watching a film, feeling things for these characters the way we never would if we were put in their actual situation.

Such is the case for Ulrik (Stellan Skarsgård) who has just been released from prison where he spent many years locked up for killing a man he caught in bed with his wife. He is not only sheepish and quiet, but he doesn’t seem to have any way of making his own path down the slippery road of recovery and assimilation back into society.

Ulrik may not say much, but it’s only because those around him won’t let him get that far. His old employer, the mafia boss of the Oslo suburb, greets him with accepting, albeit conniving, arms. He sets Ulrik up in an apartment owned by his sister who, though also antisocial, warms to Ulrik and his soft demeanor and soon becomes jealous of the attention he draws from other women. In fact, women in general still find him attractive, and it appears that he was never really a bad guy. He is a gentle man, if not in his actions, then in the instincts he must ignore when employed by the gangsters.

Adjusting to life out of jail is as rough as Ulrik was expecting, especially because his boss is trying to convince him to go back to work in the business of intimidation, threats and killing off. Concurrent with his boss’ need to right the wrongs done to him, Ulrik must endure an inner struggle between what he wants – a mundane, safe life out of the mafia spotlight – and what he is expected to do.

Skarsgård portrays the main character convincingly, as he is particularly talented at giving his audiences a subtle look of sullenness and unending contemplation. Skarsgård brings to the character all that any casting director could ask of an actor when his role has surprisingly fewer lines than would be expected. Most of what comes across to the audience is a feeling, a sense of who Ulrik is, which conflicts with what he has done in the past.

There are laughs in this film, however dark and unassuming they may be. In particular, the scenes between Ulrik and the landlady involving the “sex for food” subplot are the funny parts, which the film could use more of. These calm moments are the ones we yearn for so that we can further study the art that Skarsgård has mastered.

There isn’t too much to this film in terms of action or plot, but what director Hans Petter Moland does offer is a small wonder of a film that is a treat in this age of cumbersome filmmaking.