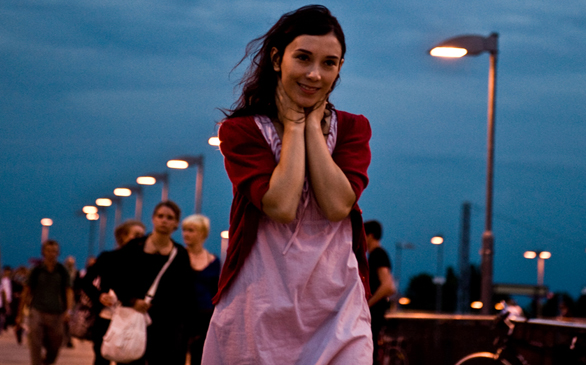 Umay (Sibel Kekilli) in When We Leave
(Credit: Olive Films)

According to U.N. reports, there are over 5,000 cases of “honor crimes” committed against women across the globe each year. These crimes involve the injuring or killing of a woman who is “dishonorable.” This is the subject of the German film When We Leave, which is the official German entry for Best Foreign Language Film at this year’s Academy Awards.

Umay (Sibel Kekilli) is a young mother who wishes to escape the abusive and oppressive relationship with her Turkish husband Kemal (Ufuk Bayraktar). She takes her young son Cem (Nizam Schiller) and travels to her parents’ home in Berlin. Being Muslim (as it is in many cultures), Umay’s family struggles between their love for Umay and the shame she is bringing upon them by leaving her husband with no intention of return.

This film is a very quiet one, making very powerful statements in small moves. Umay herself has a quiet determination to keep her son away from his father and only grows loud and desperate when her family tries to physically take Cem away from her. Even the fact that Umay left her husband is difficult for the family to speak of, and every mention of it has a huge weight behind it.

There is a great deal of pressure on Umay to obey the men in her life and also on her brothers to be men. Although there is a great love for her in her family, even her father gives her little sympathy, siding with Umay’s husband in the matter and even calling his daughter a “whore.”

This brings up a lot of questions about women’s rights and how culture plays into it. In this specific circumstance, and also across other cultures, the woman hatred stems from a desire for the man to be in complete control of his family. Anytime a woman tries to be independent from a man’s control, she runs the very real risk of being physically punished. This archaic point of view continues to exist today, so much so that Amnesty International has a “Violence Against Women” campaign trying to protect the rights of women across the world.

The look of the film is very warm, whether it is showing dusty Turkey or the breezy summer in Berlin. Umay enjoys the summer weather, shedding her traditional head covering in favor of lightweight dresses and sweaters. One could imagine that this is a visual confirmation of the shame Umay has laid on her family. Ultimately, in the end, her son Cem (played by Schiller with a tiny, doe-eyed depth) is the victim of Umay’s family’s cultural hatred toward women. With this, the film makes another powerful statement: When you hurt women, you hurt children as well.

When We Leave releases in select theaters Jan. 28.