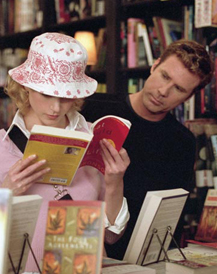 As much as I like Will Ferrell, I wish he weren’t in Bewitched.

Ferrell underlines what’s wrong with Bewitched and a lot of current movies: There’s no point of view. The folks behind Bewitched had an idea – re-jigger the ’60s TV series about a witch who marries an average guy – but they couldn’t decide what kind of movie to make, so they came up with three scenarios and Superglued them together.

One of these scenarios involves Ferrell as the star of a remake of "Bewitched." He’s either an obnoxious creep or a sweet dope; the movie can’t decide which, so Ferrell is forced to play both.

Ferrell can give a genuine performance – he was swell in Elf and last month’s Kicking & Screaming – but his character doesn’t resemble any kind of a real person. So Ferrell resorts to the sort of skin-deep performing that was hilarious in three-minute doses on "Saturday Night Live" but that grows tedious in a couple of hours, especially since many of his jokes simply don’t land.

The second scenario is an Adaptation wannabe, an insidery look at the behind-the-scenes of Hollywood that might be funny if Bewitched could commit to it. Instead, it fritters away satiric opportunities, completely wasting the unique talents of a bunch of actors, including Shirley MacLaine, as a ham hired to play Ferrell’s mother-in-law on the "Bewitched" series, and Kristin Chenoweth, as a showbiz-obsessed groupie.

You may have noticed I have not yet mentioned Nicole Kidman. That’s because she’s the focus of the parts of Bewitched the movie is least interested in. With conviction and humor, Kidman plays an actual witch hired to play one on TV.

Kidman uses a voice that’s part little girl, part sex kitten, and her look is somewhere in the middle, too (she strongly resembles Ann Margrock on "The Flintstones"). She captures the naiveté of someone delighted by the details of real, human life – someone who was raised in a world of magic but has come to realize "it doesn’t mean anything unless it’s real."

That’s a great lesson for a romantic comedy, which can pile on all the fairy-tale love story it wants as long as it’s grounded in real human longing and belief. But the movie didn’t learn that lesson. Watching Bewitched, you can tell Kidman had an idea of the kind of romantic metaphor this movie should be and that she was right and that nobody agreed with her.

Bewitched is currently in theaters.