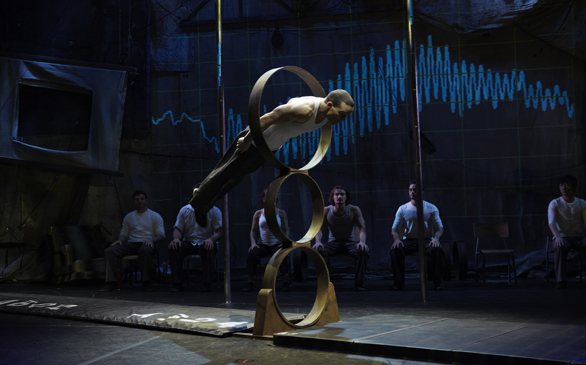 Picture this: You’re applauding uncontrollably after witnessing one of the most amazing acrobatic stunts you will ever see. Then, you pause about 10 seconds. Alright, wait for it – yes, now. Your thunderous applause immediately returns, because you have no choice but to continuously applaud these acrobatic performers. That’s sort of what being in the audience of “Traces” is like.

You don’t know what impressive is, you know no one who deserves the title of “multitalented” and your definition of stamina is way off – until you’ve seen “Traces.” These seven artists – six men and one woman – truly boast multiple talents, all of which are extraordinary.

The entire ensemble kicks off the show with what one can only describe as seven people running mad on stage, but all the while squeezing in as many stunts as possible in the opening number. The artists tumble simultaneously all about the floor while those in the background (two men) throw a lady in the air while she dives at another man who somehow manages to catch her.

The madness continues for about seven minutes or so with the most action-packed acrobatics you’ll ever see. Even if you are familiar with impressive acrobatics, these performers are doing tricks one after another in a matter of seconds.

Mason Ames and Valérie Benoît-Charbonneau start off with an acrobatic dance duet that makes your campus cheerleading squad look like a joke. Of course, he lifts her up in the air with one arm, which most of us find impressive enough. But then Ames goes on to yo-yo Benoît-Charbonneau over his head, between his legs, behind his back, any place you’d never imagine. The duet is stunning and brilliantly choreographed.

Original cast member Henderson’s “Wheel” is equally impressive. He essentially spins inside of a metal ring by shifting his weight, just as a quarter spins on a table. His specialty is not only astonishing but interesting to see how someone can use their body in such a way.

The biggest crowd-pleaser is Florian Zumkehr’s stunt with a chair. He doesn’t sit; he stands. And he doesn’t stand with his feet the whole time; he also stands on his head. And he’s not pulling a headstand on the base of one chair. His fellow artists assist in arranging three chairs atop one another. Only then does he perform a headstand, a one-handed handstand switching arms, perfectly erect in the air.

The ensemble together is terrific. No one knows trust like these performers. They rely on one another to jump over them on roller skates, to catch them when someone throws them in the air and to not crash into them as they’re flying towards one another in the air.

You’ll never see anything like it. It’s unbelievable, and the performers’ personalities are layered in throughout the show. From the very beginning, the performers tell a little about themselves. While it might appear out of place at first, it makes the show that much more magical and personal as it progresses.

Director and choreographers Shana Carroll and Gypsy Snider and acrobatic designer Sébastien Soldevila showcase amazing originality in “Traces.” If it’s even possible to have a tougher job than these incredible performers, Carroll, Snider, and Soldevila have it.

It is fascinating enough to watch the acrobats’ movements, stunts and tricks. But your curiosity overwhelms you as you sit and think who created their movements and choreography and how it could possibly be done.

The show is astounding, and you won’t want to miss these performers truly give their heart and soul to this breathtaking spectacle. “Traces” will make you soar with delight and dive into a most magical place.