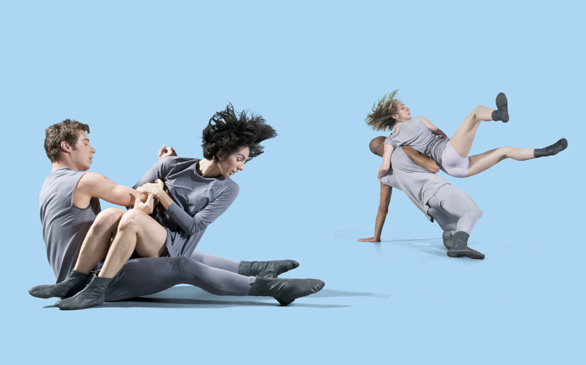 One of Brazil’s most celebrated performing arts companies, Grupo Corpo was founded by six members of the Pederneiras family, including choreographer Rodrigo Pederneiras. This week they perform two pieces, “Parabelo” and “Ímã,” both bursting with joyous dance movements and musical rhythms influenced by samba, capoeira, rhumba, bossa nova, tango and carnival.

Rodrigo Pederneiras: “Grupo Corpo” was established in 1975. The name chosen for the company was Grupo Corpo, which literally can be translated as “Body Group.” Despite growing into a bigger company and running an important dance school, there is still the same spirit of unity that was there at its origins.

The creative collaboration between the direction, administration, the artistic director, the choreographer, dancers, lighting designer, scenic artist and costume designer has grown ever closer and the new works have gained each time greater harmony and unity. Grupo Corpo has developed along those 35 years a very specific style, based on the Brazilian way of life.

What influences your dance performances?

The Brazilian culture is reflected in our work, through the music, the rhythm and also the way Brazilian people move.

Since my initial works, I began to create a spatial design, drawing imaginary lines from the entry and exit points of the dancers on the stage, testing my control over structures and movements. Even though classical ballet techniques were the basis of my work, little by little Brazilian movements begun to be brought to the stage. We became to dance in a Brazilian style, showing some peculiar movements inherent to Brazilian people.

How is it working with family?

I think that the intimacy in excess isn’t good for work itself but helps a lot to overcome problems. And beyond the Pederneiras, there are other Grupo Corpo founders that have the same importance. The most important here is the trust that exists between these people.

How did the ideas for this L.A. show come about?

The program is composed of two pieces: “Parabelo” and “Ímã.”

“Parabelo” is a sort of old gun that was used in the beginning of the last century. This piece was created in 1997 and was inspired in a region of the northeast of Brazil, where the sun is so strong that it kills like a gun. But, on the other hand, it is a place of a very rich popular culture.

“Ímã” means magnet, and the idea behind this piece, created in 2009, is the attraction and repulsion between the parts and the whole.

Is music a big part of the performances?

Yes, the music is the basis and the principle of my works.