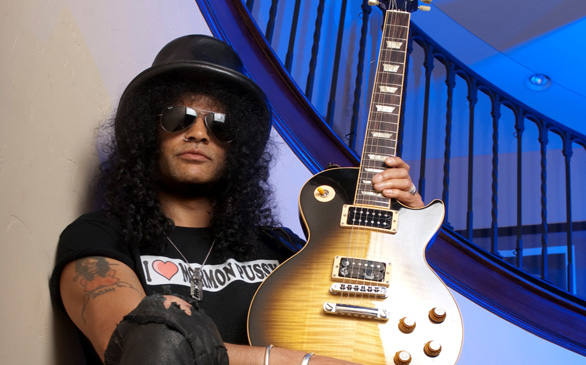 For all his accolades, worldwide recognition, admiration and reputation as one of the most down-to-earth dudes, the one thing you wouldn’t assume about Slash is his insecurity regarding his own guitar playing.

“I try to spend a minimum amount of time not playing the guitar. I’ve always got a guitar close by ’cause I always think I’m going to forget how to play,” Slash admits with a little laugh.

“I’m definitely humble about my guitar-playing prowess, and I’m constantly trying to get better at it so that I can feel more confident about it,” he adds.

The last two years have seen Slash dominate the news regarding Velvet Revolver’s new singer search, the unlikely reunion of Guns N’ Roses (including Axl Rose’s constant scorn) and his talent-laden eponymous solo debut. In addition to his first full movie score for This Is Not a Movie, the dude’s also a successful published author, and he has a place on the Hollywood Rockwalk. With so much diverse, rich talent, it’s comforting to know that his inability to play poker (He’s too impatient.) or basketball (He can barely dribble.) makes him human after all.

Like Santana’s last four albums, Slash grouped together some of today’s hottest acts to keep himself busy. Where Slash succeeds more than Santana, however, is Slash never dropped off anyone’s relevancy radar. Supernatural was a defibrillator for Santana’s career. Slash’s debut is a cathartic endeavor for an artist who continues to impress without having to prove he’s still got it.

The process wasn’t as easy as you’d think for this generation’s Jimi Hendrix. Although Slash admits he didn’t hear many no’s and no one outright told him that they refused to work with him, he did have to deal with his muse’s greatest nemesis: distractions.

“If I’m locked into something, and I’ve got a definite idea, then it’s easy,” Slash says. “Trying to ascertain whether you have a definite idea is a task unto itself. I’m always focused, but I’ve got a lot of distractions.”

Two of his album’s best and head-turning-at-first collaborations include Black Eyed Peas’ darling Fergie (“Beautiful Dangerous”) and Maroon 5’s Adam Levine (“Gotten”). Both songs initially make you wonder how it could possibly work, but then they remind you that foresight is one reason why genius is sometimes misunderstood.

When Slash’s solo album was coming together, he didn’t contact musicians to ask them if they wanted to play. He kept busy in his studio and just jammed. At the end of the day, he’d go through his Rolodex of rock stars and pick out the ones he thought would gel with his tunes the most.

“I compose the music first, and the music called out for a good female rock singer on one [Fergie] and somebody with a voice like Adam’s [Levine] on the other,” Slash recounts. “I went with the voices that came to mind.”

The one voice that handles the majority of the hype is Alter Bridge’s Myles Kennedy. His name might not be familiar to many, but his reputation as one of rock’s most underrated voices is definitely making people notice now. Not only is he Slash’s main singer on his current tour with Ozzy Osbourne, but it was revealed in late 2010 that Slash’s sophomore effort will exclusively feature Kennedy on vocals.

“[Kennedy] just has a really gorgeous voice,” Slash says. “He really has a voice that one can appreciate from a technical point of view and also from soulful point of view. He’s just really one of those people that’s gifted.”

One reason Slash’s solo album got its strong legs from the start was his involvement with Mexican director Ollalo Rubio, who commissioned Slash shortly after Velvet Revolver imploded to score This Is Not a Movie. The experience was a welcome mat of sorts to the idea of doing his first solo album.

“Scoring a movie brought a side of me musically out that I had no idea existed,” Slash shares.

“A couple of the pieces of music that I wrote for the actual score ended up on my record, and one of them was ‘Crucify the Dead,’ which is the Ozzy song,” Slash adds. “‘Beautiful Dangerous’ got its start in the score. Although I’d already written the song ‘We’re All Going to Die’ musically, I used it for the score and reintroduced it to myself to go after Iggy Pop and make a real song of it.”