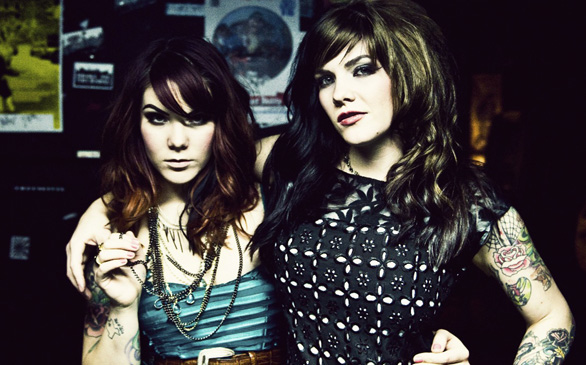 Los Angeles rock band Civet has announced plans to release their fourth studio album, Love & War, via Hellcat Records. Fronted by sisters Liza Graves and Suzi Carmichael, Civet holds the torch once held by groundbreaking female-fronted acts like the Runaways, Bikini Kill and L7, and according to Graves, the band is now recognizable for their own sound.

“On this record Suzi and I not only found our voice, but we rediscovered our punk rock ’n’ roll roots,” says Graves. “Our choruses are bigger and badder than the last record and coupled with blazing guitar solos and the raw vocals everyone has come to expect. We sound like a combination of Motörhead grit and ’77 raw power.”

The first single from Love & War is called “L.A. Nights,” and you can hear it now at soundcloud.com; the full album drops on Feb. 22.

Green Day is Awesome as What?

Multi-platinum rock band Green Day will release a brand-new live album entitled Awesome as Fuck on Reprise Records March 22. The set will include a CD, plus a bonus DVD and feature performances captured during the band’s 2009-2010 world tour in support of their Grammy Award-winning album 21st Century Breakdown.

The band recorded every show on that tour, and they’ve sorted through it all and picked the best audio cuts for the CD (including a take on “Burnout” that was recorded in Irvine) and decided that footage from their Tokyo stop would be what appears on the DVD. Those who purchase the set digitally will get two additional songs, “Letterbomb” and “Christie Road,” while purchasers at iTunes will get a third bonus cut, “Paper Lanterns/2000 Light Years Away.”

Neko Case is giving away her classic 1967 Mercury Cougar as the top prize in a raffle being held to benefit the 826 National literacy project. The car, with an automatic transmission, red interior with aqua space lights, wood steering wheel, hideaway headlights and original burgundy paint job, can be seen on the cover of Case’s album Middle Cyclone.

Raffle tickets are on sale now for $45 each at nekocase.com/auction and a prize a day, including one of Neko’s guitars, an Anti- catalog of records, a 60-disc Matador Records sampler, an autographed New Pornographers drum head and a guitar signed by Elton John, Elvis Costello, Ralph Stanley and others, will be awarded starting Feb. 14. The car, filled with road trip goodies like Rand McNally guides, gift certificates to Chipotle Mexican Grill and a year’s supply of Tazo Tea will be given away on Feb. 18.

The raffle’s beneficiary, 826 National, operates a network of nonprofit centers, including in Los Angeles, that help students ages 6 to 18 develop their expository and creative writing skills.

You might be familiar with the work of L.A.-based rapper and producer TopBananas thanks to his remix of Lykke Li’s “Get Some.” Now, in conjunction with the publication of music critic Brandon Perkins’ online novel Please Use Rear Exit, Bananas makes his debut on video with his own song “Waiting for My Time To Come,” a part of the digi-novel’s soundtrack.

Set in Los Angeles, “Waiting for My Time To Come” follows Bananas’ journey on the L.A. public transportation system, simultaneously trying to balance his mundane 9-to-5 job with the devotion to music that gets him up in the morning.

“It’s always a struggle for balance,” says Bananas, explaining how his video fits with the storyline of Please Use Rear Exit. “To me, Please Use Rear Exit is the story of a blue-collar guy trying to keep his sanity outside of work. And then there’s the whole DIY aesthetic of what the book actually looks like; ‘Waiting’ just seemed like a perfect fit.”

The project is a run-up to the spring release of Electric Nights, a seven-song effort that TopBananas intends to release as a free download.

Goner Records artist Ty Segall lives in the Bay Area now, but he grew up in Laguna Beach, and life in both parts of California inform his new album, Melted. Segall says that Melted sounds like “cherry cola, Sno-Cones and taffy;” find out for yourself when Segall plays the Echoplex Jan. 27.