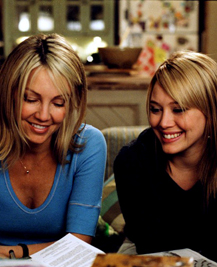 Hilary Duff has a new movie, and, as usual, what distinguishes it is everything but her.

Duff has an engagingly awkward quality, and she isn’t a bad actress, but she isn’t getting any better and she seems to have been 13 for about six years. In Duff’s movies, the question is whether the movie will find enough interesting stuff to compensate for the blandness at the center. The Perfect Man does.

For starters, the script is sharper than scripts in this early-adolescent category usually get away with being. The dialogue is clever (particularly an early scene in which Duff and Heather Locklear, as her mom, turn a license-plate car game into a verbal contest). Many of the plot developments do ring hollow – Locklear, for instance, is an alarmingly insecure person who, in real life, would need drugs and three-times-a-week therapy, but the movie treats her insecurity as a gag. Even so, Perfect Man arrives at some thoughtful conclusions that are likely to strike chords with mothers and daughters.

The hollow stuff also has to do with Duff’s efforts to find her mom’s perfect man (Chris Noth, the second consecutive Carrie Bradshaw/"Sex in the City" swain to co-star in a Duff film, after John Corbett). She does it via e-mail love chats with Mom, purporting to come from Noth. That’s icky, and the surprise is that the movie, unlike most romantic comedies, deals with the ickiness of its how-do-we-keep-these-two-apart-until-we-put-them-together? premise.

The Perfect Man is similar in many ways to Sleepless in Seattle, but, instead of putting the romantic complications in the center of the movie, it focuses on the Rosie O’Donnell character (Duff) and the rest of the supporting cast.

That’s a smart movie. In romantic comedies, the supporting actors are almost always the most fun because they get to avoid the romantic stuff and act like real people. In The Perfect Man, those people include Mike O’Malley, Caroline Rhea and a little girl who may be a gender-reassigned Jonathan Lipnicki. Giving them plenty to do makes Locklear and Noth more appealing, because we don’t have to spend so much time with their eye-googling, and it makes the movie a lot more fun.

The Perfect Man is currently in theaters.