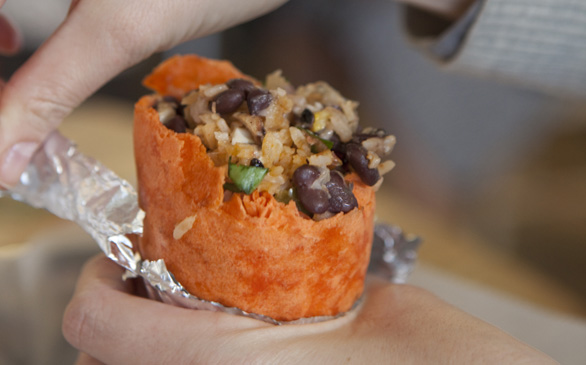 It’s a free country, right? To Americans, freedom of choice is one of the most valued liberties. Actually, it is one of the most cited rights directly applicable to daily living. So here’s a question, why should this liberty be suffocated when it comes to food? Freebirds World Burrito is looking to bridge the gap between our natural tendency toward unlimited freedom and narrowed food choices.

Freebirds, a concept burrito restaurant, has opened their second California location in downtown Los Angeles, across from USC. The original Freebirds opened in Isla Vista, near UC Santa Barbara, over 23 years ago.

With all the burrito joints in Los Angeles, why the need for another one? Because Freebirds is fresh food and gives you the “freedom to express yourself through the food you eat,” says Jeff Carl, chief marketing officer.

Upon arriving, guests are paired with a team member, known as a roller, and they will guide through your order the whole way, instead of handing you off to someone else like an insensitive assembly line. Your roller ensures that your food is made exactly how you want it, using only the freshest ingredients like grass-fed beef, hormone-free chicken, all natural pork carnitas or crispy fish topped with hand-cut veggies.

With four sizes and four flavors of tortillas to start with, a mathematician will find that there are over 2.2 trillion choices to customize your own burrito. (Yes really, they did the math.) The “Super Monster” burrito, a true man’s man burrito can weigh up to seven pounds. Take that, taco stands!

The theme to Freebirds clearly is freedom, with a free-spirited ambiance and a late ’60s rock ’n’ roll soundtrack. They like to say, “you rock, we roll,” and truly it’s an experience in itself.

Carl comments, “It’s all about freedom, where else can you find a huge blowout wall of the Easy Rider movie and a real motorcycle suspended from the ceiling?”

Each Freebirds location features the signature Statue of Liberty – affectionately known as ‘Libby’ – riding a custom-built motorcycle while breaking through the Freedom Wall. Libby serves as an awesome visual reminder and encourager to break through walls and change the world.

Freebirds more than anything is just about fun. Guest can enjoy making “foil art” with the foil left over from their burritos to leave on display around the restaurant. In some places, the art begins to take over, where Carl says, “It’s almost like we need a curator for the foil art.” They really emphasize freedom of expression in more than just your food choices.

True to their word of having more choices, the menu extends beyond just burritos. Open at 6:30 a.m. Monday through Saturday, and at 10:30 a.m. on Sunday, you can grab spiced coffee or horchata and a breakfast burrito, or guests can have tacos, freedom salads, bowls and more. Freebirds is open until 1:30 a.m. on Thursday, Friday and Saturday and 9:30 p.m. on Sundays.

Not only does Freebirds strive to feed your belly, but your soul as well. Freebirds World Works was created to work with every World Burrito site to partner with two local charities to “help create awareness, act as a volunteer resource and become ambassadors” of their organizations. For the Los Angeles location, the Art of Elysium, which provides artistic workshops for children battling serious medical conditions, and Union Rescue Mission, which embraces people experiencing homelessness, have been named the designated charities. If the fresh food wasn’t enough to draw you to Freebirds, their charitable spirit will. You can eat well and feel good about it. Food with a conscience, yum!

It was the perfect storm for Freebirds grand opening. It was the first week back to school for USC students, and it was the first big party night that Thursday, Jan. 13. Add perfect timing to word of mouth buzz, and you get a grand opening that had to stay open 24 hours. People were still in line for burritos at 4 a.m. They waited in line for something they thought was going to be worth it – and it is.