The Purple Is Turning Blue 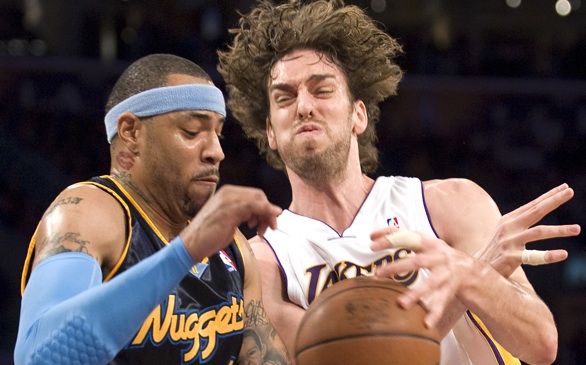 The Lakers have yet to panic about their current form on the hardwood, but everyone else is. In fact, their true color of purple is practically turning blue for the Lakers spectators. They have lost two consecutive games, including a surprising defeat to the Sacramento Kings Jan. 28, not to mention a lethargic loss to the Boston Celtics Jan. 30. What is worse is that both came at the Staples Center.

What is wrong with the Lakers? A few things here and there, but their inability to be defensively consistent needs to improve. Yeah, the above par statistics are present to depict otherwise. Sure, the team carries several great individual defenders. Nevertheless, the team’s effort image is plaguing their woes as of now.

Point guard Rajon Rondo was an integral element in the Celtics’ 109-96 victory over the two-time defending champions. Rondo amounted 10 points and 16 assists to go along with five rebounds.

“We knew we could run on L.A.,” Rondo declares. “L.A., given the personnel that we have, we thought we could outrun them.”

And the Celtics did just that.

“I think he called an absolutely perfect game. He’s our pitcher. [We] lost our senses in the second quarter for a stretch,” Celtics head coach Doc Rivers says of Rondo. “We got into complaining about everything, except for playing basketball, and I told them at halftime just keep playing through anything.”

SoCal native Paul Pierce garnered 32 points, Ray Allen recorded 21 points and Kevin Garnett’s double-double of 18 points and 13 rebounds gave Boston a big boost. “It feels good to come back in this building and get a win,” Pierce admits.

For the Lakers, Kobe Bryant experienced a great individual day after collecting 41 points on 16-of-29 from the field, including three treys. In addition, Bryant surpassed the 27,000-point plateau in his career, but he was not happy about it.

“I think guys are upset, and they should be. We’re not playing very well against these top teams, so we need to elevate our level and need to get better if we’re to defend our throne,” Bryant comments. “There’s no other option but that.”

Lamar Odom added a quiet 15 points and five boards, while Pau Gasol had 12 points and seven rebounds in what was almost a nonexistent game for him. Andrew Bynum connected for 11 points and six rebounds, but his committing fouls and soreness in his left knee kept him in trouble and pain, respectively.

Lakers head coach Phil Jackson does not hit the panic button after the affair.

“Is it the playoffs yet?” he utters. “No. We’re still playing regular-season games. We’ll get there in time.”

“I never panic. It’s just fuel to get better,” he confesses. “Would we like to win these games? Absolutely. But the point is to continue to get better.”

Even Odom is not panicking.

“You can’t allow yourself to hit the panic button. It doesn’t matter how much time is left,” he says. “It’s time for us to get better as a team and get this thing down pat consistently so we can play the same way all the time offensively and defensively.”

However, the Lakers are 0-4 against some of the best teams in the league thus far this season. That includes losses to the Celtics, Miami Heat, Dallas Mavericks and San Antonio Spurs.

“We’re not playing very well against the top teams,” Bryant says. “So we need to elevate our level, and we need to get better if we’re to defend the throne.”

The Lakers are done with games in January, but the first two weeks of February are no charm. They host the Spurs (Feb. 3) before heading out on a seven-game road trip, which has its third and fourth games in Boston and then New York.

“It’s going to be measured down the road if this team is going to be better or worse, but I like our team. I like our chances,” Gasol states. “Obviously, Matt [Barnes] is out, and that hurts us a little bit because it shortens our rotation. But we pretty much have everybody we need back.”