Brotherhood: Director Will Canon exposes the dark side of pledging. 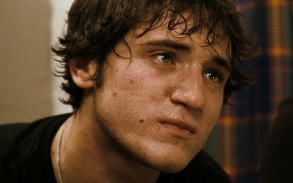 Things have gotten out of hand lately. College kids don’t just have keg stands and binge drink, they play awful, mean-spirited and highly dangerous pranks that don’t seem to be benefiting anyone. One of the causes, though by no means the sole reason, for this influx of young drinkers is the popularity of the Greek community, you know, fraternities and sororities. The houses are clubs that revolve around brotherhood and sisterhood, but whose bond often comes from getting drunk and doing stupid things.

It’s not a crime; just blame it on the stupidity of youth. As a cultural study of our society, it’s a rather interesting topic, one that writer-director Will Canon has spent years studying. He made a short film when he was a student at NYU, and the movie that ran about eight minutes left him wanting more.

“I always felt there was an opportunity to have a lot of fun with the story,” says Canon. “I thought that if I expanded it, I could explore the characters a little bit more and do something that was fun, but that had depth to it as well.”

Though it sounds like a simple story, Canon and co-writer Doug Simon are the masters of throwing in twists and turns when you least expect it. In Brotherhood, Jon Foster is Frank, the pledge master of sorts in his fraternity, responsible for getting the new members (aka pledges) through the hazing process alive and bonded. Trevor Morgan and Lou Taylor Pucci are two such pledges who are chosen by Frank as future leaders of the brotherhood. Hence, they are forced to go through with an initiation prank that is a little different than the others who must steal toilet seats from the neighboring sorority.

“I talked to everyone I knew who had been in a fraternity,” says Canon about how he prepared for situations he did not know from firsthand experience. “Right after I graduated from NYU, I was back in Texas, and a friend of mine was at a school there. He let me hang out and see what they did and what they were all about. I told them, ‘Explain dynamics to me. Explain what you liked about it, what you didn’t like about it.’”

What Canon produces is a film that takes a rather extreme story and makes it totally believable. Without giving too much of the plot away, the initiation prank – making the pledges think they will have to rob convenient stores – goes horribly awry, leaving Pucci’s character injured and the rest of the boys scrambling to agree on how to resolve the situation. As preparation, the director gave the actors a little assignment to help them find their inner frat boy.

“I called Jon and told him, ‘I’d be interested in you hazing these guys,’” says Canon. “He took all the actors who play the older brothers in the fraternity, and they organized the guys who were going to play the pledges. They came up with different hazing rituals to get them in the mindset of where their characters are on the food chain and to establish the dynamics of this group. I think Jon and the other guys had fun with it. I don’t know if it was really fun for the pledges.”

What also was not fun for the cast and crew were the grueling conditions of the set. Canon shot the film in his hometown of Arlington, Texas, at locations he used to visit as a child. The fraternity house in the film was a working fraternity for 30 years, but has since been abandoned, which brought along with it some unforeseen hazards and difficulties for the shoot.

“We shot in August in Texas,” says Canon. “The fraternity house we were in was abandoned so it had no electricity or air conditioning. There were dead animals rotting under the floorboards of the house. We would shoot all night and sleep during the day.”

And if you think this is some exposé of the Greek community, think again. While at NYU, Canon was no part of it and has only acquired details secondhand. However, Brotherhood is not a film meant to condemn fraternities or shine any sort of light on their shortcomings.

“To me, this isn’t a movie about the Greek system,” explains Canon. “It’s just about people, and people are going to do things in their own self-interest regardless of what institution it may fall under. For me, it wasn’t about making a pro-fraternity movie or anti-fraternity movie. It didn’t really matter to me. It was about people.”

Brotherhood releases at the Angelika Film Center in Dallas on Feb. 18 and Laemmle’s Sunset 5 in Los Angeles on Feb. 25.