The Sun And Your Skin: Doctors Disagree on Benefits of Exposure to Rays, but Not on Risks 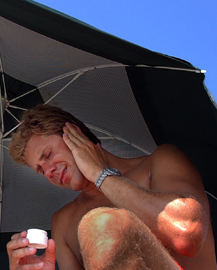 There are three common types of skin cancer – and Jim Jones has had them all.

Doctors removed his first basal-cell cancer from behind an ear about 30 years ago. Since then, he has had the most dangerous skin malignancy, melanoma, taken off his chest.

More recently, he underwent major surgery to remove a deeply embedded squamous-cell cancer from his left cheek. Doctors have cut dozens of lesions from Jones through the years, making skin cancer a regular part of his life.

Today, the Sanford, Fla., man uses sunscreen, seeks shade, or wears hats and avoids being outside during the most intense hours of the day. Such precautions are the mainstay of doctors’ advice on reducing the risk of skin cancer – the most common malignancy in the United States, with more than 1 million cases a year.

Yet Florida’s crowded beaches are proof the advice is ignored. What’s more, doctors now are fielding questions about reports that sun exposure might reduce the risk of some cancers by boosting the body’s production of vitamin D.

No one is suggesting people fry themselves. The thinking is that about 15 minutes outside with no sunscreen, two or three times a week, is enough to increase vitamin D production in the body. In turn, vitamin D wards off the cell damage that could lead to cancer.

But many dermatologists and medical organizations, including the American Cancer Society, are cringing at the notions that turn traditional sun-safety logic on its head.

One proponent of the sun’s potential cancer-fighting effects is Dr. Michael Holick, a Boston vitamin D researcher who wrote a book called The UV Advantage. He is just as irked when the American Academy of Dermatology refers to views on spending unprotected time in the sun as "irresponsible."

"Like anything else, in excess, the sun is not going to be good for you, but in moderation, it’s not going to hurt you," said Holick, who teaches at Boston University. "The problem is that the American Academy of Dermatology is a very conservative organization.

"They’ve been out there for years brainwashing the American public to not go out in direct sunlight without sunscreen, and for someone to challenge them is a big controversy."

One point on which everyone agrees is that skin-cancer rates have grown to epidemic levels in the United States. Fortunately, most cases fall into two typically curable categories called basal- and squamous-cell carcinomas.

Though rarely deadly, these cancers can be recurring and disfiguring as doctors continually remove the malignant tissues. More than 1 million cases are expected annually in the United States.

While many doctors are waiting for more information, vitamin D proponents say the evidence that it cuts the risk of some cancers already is compelling.

Holick cited a study that found men with higher levels of vitamin D in their blood cut their risk of prostate cancer by 80 percent. Additional studies suggest the vitamin might ward off lymphoma, lung, breast and colon cancer.

Though some foods are rich in vitamin D, Holick said most people can’t get enough of it through their diets alone. He said people need about 1,000 international units of the vitamin daily to get its cancer-prevention benefits. A glass of milk has about 100 international units – meaning people would need to drink 10 glasses of milk to reach that level.

Doctors don’t disagree that vitamin D might have anti-cancer benefits. But many say they cannot support using the sun to get more of it.

"It’s a highly irresponsible message to give to people," said Dr. Clay J. Cockerell, a Dallas dermatologist and president of the American Academy of Dermatology. "Basically, just walking to and from your car, you’re getting enough sun to get any additional vitamin D that you’re not getting in your diet."

He said sunscreen doesn’t provide complete protection, so people still get some UV exposure even when they’re wearing it. Furthermore, he said, people can boost their vitamin D levels with a supplement if they want.

"There are a lot safer ways to get vitamin D," he said.