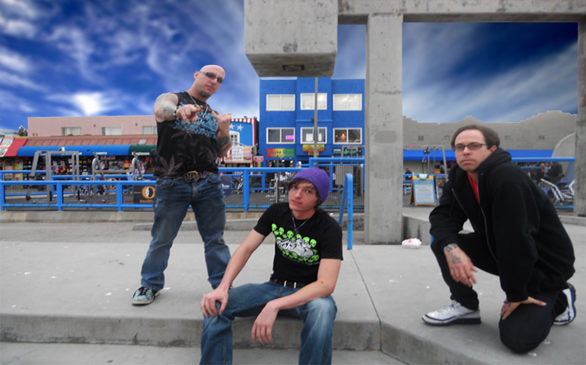 With a band name like Kushinator, there’s no doubt that this album is going to be, uh, smokin’. And for full disclosure, you should know that Kushinator frontman Sean “Mister Insanity” Kush is also the head honcho at the Medical Kush Beach Club, a medical marijuana dispensary in Venice.

With that in mind, it’s not much of a stretch to imagine the music offered here as a set of goofy odes to rolling fatties presented with a carefree sloppiness. But surprise, bassist/singer Kush and his cohorts (guitarist Tommy “Gun” Demers and drummer Johnny Dunn) are serious about the music, and while songs like “Green Marbles” are clearly about the bud, the band rocks like a heavier, thrashier version of Primus with Kush’s popping and clicking five-string bass-playing pushing the song way past typical stoner rock.

Kush sings with an emphatic if not angry shout on most of the songs and a cursory listen will bring comparisons to any number of nu-metal and rap-rock groups, but there’s also a sophisticated level of musicianship here that harkens back to acts like King Crimson. These guys may or may not like to partake once in awhile, but there’s no way they could perform like this if they’re glued to the bong all day.