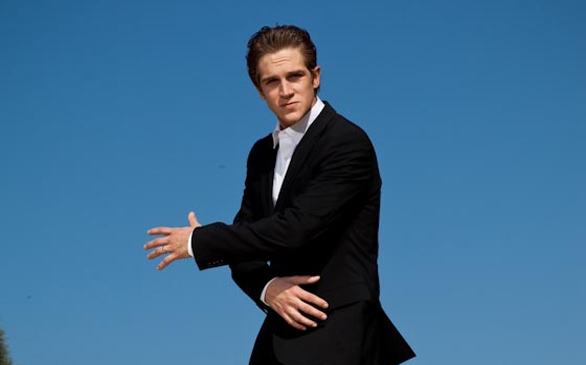 Jason Mewes, aka, Jay, is all grown up.

If you are expecting long, flowing hair as blonde as a surfer’s that is partially covered by his distinctive beanie, then you are almost two decades late. The hair is noticeably shorter and now a shade of light brown. He has retained the slightly baby face he had in the early ’90s, but what distinguishes him as the Jay we all knew and loved is the raspy, bordering on hoarse, voice that brings out the angsty teenager in us all.

Clerks came out in 1994 and was the first film for its stars Jason Mewes and Kevin Smith, more famously known as Jay and Silent Bob. Predominantly financed by credit cards and donations from family members, Clerks found a large following of young, grunge-happy teens who could relate to the do-nothing attitude of its title characters. For the stars, however, the film was an homage to their New Jersey upbringing and their unusual friendship.

“We’ve always had this weird relationship,” says Mewes, talking to me instead of doing some last-minute preparation for his live podcast with Smith. “He’s just more put together than I am. I was doing drugs, and he was starting a family. It’s been this weird older brother relationship. It’s too close of an age difference to say it, but some people do say that there’s even a stepfather type of thing. It’s groovy.”

However you’d like to describe it, Smith has undoubtedly taken Mewes under his wing. Smith has cast his ‘little brother’ in every film he has written and directed, except for two. Now, the duo performs their podcast in front of a live audience at the Jon Lovitz Comedy Club on CityWalk. “Jay & Silent Bob Get Old” has existed exclusively online since last summer and is taped every Friday night at the club.

Reliant on drugs for over a decade, Mewes is on the right track, finally settling down and cleaning up his life free of substance addiction. Jordan, his wife of two years, keeps him on the right path, helping him with the littlest of things every day.

“She’s the one who makes sure I wake up to do stuff. She feeds me. She spanks me and showers me. She’s a big part of keeping things going.”

Jordan even helps with the show, ordering T-shirts and remembering props for Smith and Mewes whose cult following provides a packed audience. They haven’t forgotten about the ’90s crusaders who used to hang out at a convenience store and who have maintained a dynamic relationship that is fascinating to watch. Mewes will tell a long-winded and often tragic story about memories from his childhood. Smith will jump in periodically with a sarcastic comment and quick punch line. For their finale, they play a little game with the audience.

“It’s called ‘Let Us Fuck,’” says Mewes who couldn’t control a mischievous grin while describing it. “We play with the audience, and they can win prizes. [Kevin Smith] calls out a sex position, and me and an audience member have to imitate it, come up with what our version would be, based on what the name sounds like.”

OK, so immaturity isn’t something that goes away over night. The friends have grown up and grown wiser since they first started making movies in the Garden State, though Mewes admits that children are still not quite in the picture.

“I still don’t feel like I’ve grown up totally. Physically, I’ve gotten older. I’m married now. I have two dogs. They aren’t kids, but I’m cleaning up poop and waking up in the middle of the night. I need to make sure I can pay bills. I want to own a house and make sure things are secure. I don’t want to have kids and not be situated.”