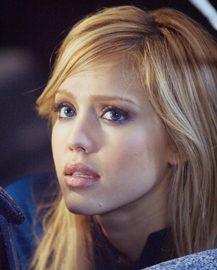 If you’ve happened to venture down the magazine aisle of your local supermarket or drug store lately, you would be led to believe that only four people inhabit this planet: Katie Holmes, Tom Cruise, Jessica Simpson and Hollywood’s latest “It” girl, 24-year-old Jessica Alba. But unlike her media cohorts, Alba isn’t famous for quickie engagements or long-rumored marital woes--she’s famous for her smokin’ ass…literally.

“I got plenty of ass,” Alba was recently quoted as telling Rolling Stone reporter Allison Glock. “I hear people in the industry talking shit all the time about how Jennifer Lopez is fat. And I know that if they’re calling her fat, they are saying the same shit about me.”

Of course, that’s not the way it seems in Hollywood. Granted thus far Alba has been largely defined by her 34-25-34 frame, but it’s not because she’s “fat.” In fact, most of her past roles required the now blonde-haired beauty to be nearly naked or covered from head-to-toe in spandex. Such is the case with Alba’s newest release, the long awaited big screen adaptation of Marvel’s longest running comic book series, Fantastic Four.

In the film Alba plays Sue Storm, a director of genetic research who is chosen among a group of individuals to be sent into space during a cosmic storm. After a miscalculation of the speed of the approaching storm causes the quintet’s DNA to be irrevocably altered, each individual soon discovers that they possess special powers. Sue is able to render herself invisible and create and project powerful force fields as the Invisible Woman. Alongside her younger brother, pilot Johnny Storm (who can now engulf his body in flames and take flight at will), inventor Dr. Reed Richards (who gains the ability to stretch and contort his body into any shape he can image) and astronaut Ben Grimm (who becomes the orange-colored, rock-like, superhumanly strong creature The Thing), the foursome form an unlikely family who can turn tragedy into triumph and catastrophe into coalition.

Given the fact that the “Fantastic” phenomenon began 44 years ago, expectations were high for who might be cast in the legendary roles of Mr. Fantastic, Invisible Woman, The Human Torch and The Thing. While most actresses wouldn’t admit to reading all the press surrounding their projects’ casting choices, Alba says she paid attention to all the Internet comments surrounding her being cast as the Invisible Woman and had her own doubts about accepting the role.

“Honestly, I was worried,” she said during the 2004 San Diego Comic Convention. “But at the end of the day, when this opportunity came I couldn’t say no. I just feel I wouldn’t be able to sleep at night if I turned this movie down. It’s such a great story and hopefully everyone will be pleased.”

Despite being typically cast as the “kick-ass girl or the hot girl,” Alba says that her role in Fantastic Four shows fans a more realistic portrayal of the Hollywood honey (no pun intended).

“[In Fantastic Four] Sue keeps trying to keep everybody together. She just wants everyone to be okay,” Alba said at the 2004 San Diego Comic Con. “It seems like when she’s trying to do that, everyone is so caught up in their problems that’s when she disappears. And so it’s very metaphorical. I love it. I’m not that familiar with the comic book, but when I read the script I just thought it was great. It’s just about family and it’s so hopeful. With so many families breaking up and with so many people so quick to sue people and to go and fight and go to war and do all these things, this is just about solving problems. And this is really who I am. I am a problem solver. I‘ve been working since I was 12. I come from a really big family and I‘m the oldest of 14 cousins, who all live in Southern California. So I‘ve always had to mediate. And I think when I sat down with Tim [Story, Fantastic director], he kind of saw that that‘s my nature.”

With Sue, Alba is grateful for the chance to step away from the more voluptuous roles she‘s typically associated with and show off her softer, more motherly side. Granted Sue is exactly the type of pinup model comic book fans worldwide crave--blonde, blue-eyed and curvaceous--but Alba’s hoping with the part that people will start appreciating her other asset as an actress--you know, her talent.

“It’s not always so great to be objectified,” Alba admits to Glock. “But I don’t feel I have much of a choice right now. I’m young in my career. I know I have to strike when the iron is hot. But I look forward to the day when I can do a small movie and act. When it’s not about me wearing a fucking bathing suit [Alba’s upcoming feature Into the Blue] or chaps.”

While Alba may not be among the list of Hollywood’s great young leading ladies yet--a list which would include the aforementioned Portman, Kirsten Dunst and Maggie Gyllenhaal--fans would easily classify her amongst Hollywood’s youngest kick-ass heroines thanks to her short-lived yet critically-praised role on James Cameron’s “Dark Angel.” But even with all of Alba’s previous physical training and the amount of special effects that went into Fantastic Four--the film‘s finalized effects are so groundbreaking that the technology used to create them didn‘t even exist a year ago--the actress admits that she began training for the role of the Invisible Woman before production even began.

“I always train before a movie because it’s actually quite exhausting,” she said at the Comic Convention. “I mean, we’re on the set and have to be there 14 hours easy on an easy day. In order to be able to do that, you’ve got to be on your game.”

It’s this professionalism, coupled with Alba’s “assets,” that played an important part in the decision to cast Alba in the role of Sue. After all, she did have to live up to almost half a century’s worth of expectations--Twentieth Century Fox couldn‘t afford to cast someone who wouldn‘t take the role seriously.

“I didn’t want Sue to be a typical female comic book character who is always crying out for help,” Stan Lee recalls when asked about his intentions when creating the character of Sue Storm. “I didn’t want her to be the damsel in distress. I wanted her to be an integral part of the team, so I actually gave her two compelling abilities. In fact, some people think the combination of Sue’s powers ultimately makes her the most powerful of the group.”

And if there’s anyone who’s not going to fall victim to being just another damsel in distress, it’s Jessica Alba. For even if she soon gets torn down by the same media outlets that are currently building her up, deep inside, Alba couldn’t care less about her newfound “It” girl status.

“I don’t need to be famous,” she told Glock. “I’m not that ambitious. At this point, if I’m not sucked in, I’m never going to get sucked in. Being the so-called hot girl, I disconnect from that. It’s not that deep.”