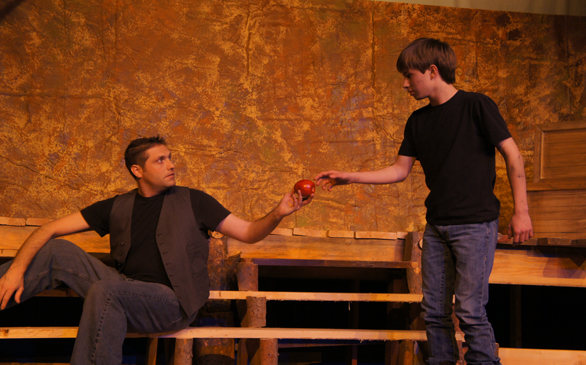 Brett Chapin and Nicholas Podany in “The Diviners”

Whether you are religious or not, you will feel the power of the Holy Spirit in “The Diviners.”

Years after his mother drowns, the troubled young boy Buddy Layman (Nicholas Podany) is afraid of water. With the help of his sister Jennie Mae (Stephanie Hawkins), a new preacher in town C.C. Showers (Brett Chapin) and his entire concerned community, Buddy searches for the healing power.

Like any community theater, the performances are typically hit or miss. Because of a few very exceptional actors, “The Diviners” can be considered one not to miss.

Jim Leonard, Jr.’s story is touching and inspiring for all ages. If you frequent Theatre Palisades, you’ll recognize quite a few of the faces from various previous shows and even catch some new ones.

Hawkins is adorable as the 16-year-old Jennie Mae (and you could never tell that she just graduated college). Emma Hawley plays Darlene Henshaw flawlessly. Her humor is impeccable, and her performance will take you back to hilarious performances from Iola Boyland on “Mama’s Family.”

Among the most talented in the cast is actually the youngest performer, Podany. His portrayal of Buddy is beyond precious and incredibly moving. Podany is a star in the making.

Director Tony Torrisi deserves praise for the tough job of keeping this play moving along, despite a challenging script.

Make a night of it, and take a stroll on the beach or even have a picnic or glass of wine before the show in the beautiful Pacific Palisades.