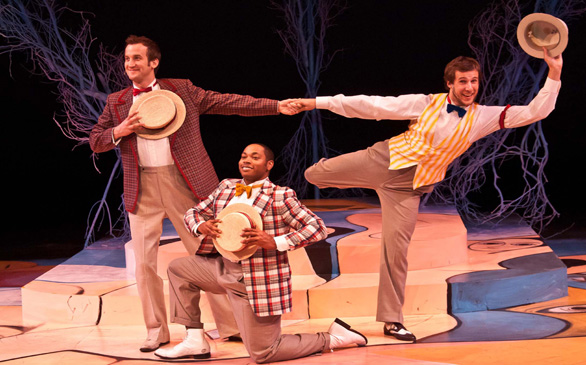 Sometimes one art form ought to remain within its respective origin, rather than crossing over into another terrain.

While most Broadway composers nowadays are throwing any remotely financially successful film up on the stage, Tony award winners Stephen Flaherty and Frank Galati make a futile attempt to follow the trend of blending the mediums in “Loving Repeating: A Musical of Gertrude Stein.”

For some reason, they venture far off track into the unmined territory of composing a musical from the works of 20th century writer and poet Gertrude Stein.

“Loving Repeating” explores Stein’s early life but leaves too much to be desired. The musical is approximately one and a half hours long, but the first half hour (at least) is filled with confusion and an extremely vague storyline.

The good news: The performers are all pretty magnificent. The bad news: They are breaking musical theater’s biggest rule by singing repetitive lyrics by Gertrude Stein over and over and over.

However beautiful the lyrics may be, it just doesn’t stand a chance at holding the audience’s attention.

Cheryl David (Gertrude) is outstanding at keeping your attention. Her role is unique and challenging in the sense that she plays the lead character in a musical, but she strictly narrates without singing.

Shannon Warne (Young Gertrude) is also terrific and she does sing. Her vocals are stellar and her chemistry with the equally talented Melissa Lyons Caldretti (Alice B. Toklas) is superb.

For those of you guilty of rolling your eyes when you’ve heard a director say, “The ensemble is just as important as the leads. If you do your job well, you can stand out even more than them,” this is the show for you.

The ensemble in this show has just as much stage time as the leads, and the four ensemble members each have multiple features and solos. Carly Bracco (Woman 1) really does steal the show quite a bit. Her adorable golden locks mixed with her mature vocals are impressive.