Love and Art Every Day 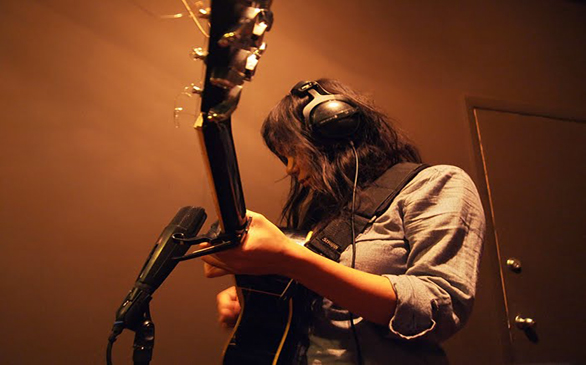 She wakes up at 5 a.m. every day to start a collection of drawings. He wakes up at 8 a.m. for a 12-hour immersion in his music studio. Together Kristina Collantes and Aaron Freeman make their contribution to the world one day at a time.

The L.A.-based couple has taken on an ambitious project suited to their forte following a trend nowadays for bloggers to start chronicling a masterpiece, a song, a picture or anything every single day. One blogger on the Web site everyhouronthehour.com even goes as far as to take a picture, any picture, every hour for one year. The most famous, The Julie/Julia Project had one blogger record her doing a recipe from Julia Child’s cookbook every day and became an instant phenomenon with a book deal and movie.

For Collantes and Freeman, they’re not looking too far into the same dimension of popularity, but simply do it to enhance their skills.

“I have a lot of illustrator friends that do the same exercise and over time you see them improve so much from drawing small things,” says Collantes. “My main goal is to sharpen my drawing skills and be just as creative as I can be. I plan on doing the project for a year if I can; that’s my goal.”

She describes some of her drawing on her blog, kristinacollantes.tumblr.com, as “some pretty finished pieces and some that are just shit and giggles.” Collantes already has a large following in the blogosphere with her dark avant-garde style of illustrations. The project has taught Collantes to focus and hone her ideas.

“I’m extremely fickle with my drawing style, which is kind of frustrating sometimes because my portfolio is messy with different styles. I learned I’m very fickle, and I can’t get out of the cycle,” offers Collantes. “Usually I have tons of ideas when I’m sitting in front of my drawing table and I want to draw everything out. It’s just hard to stick with one idea. Sometimes I’ll go off on a tangent, and it will turn into a totally different idea. It’s hard to make one cohesive illustration sometimes.”

Her boyfriend Aaron Freeman had other plans with his song-a-day project on his blog, asongadaywithaaronfreeman.blogspot.com. Freeman just finished college and was unemployed, so he had a lot of time to do what he wanted to do. Initially, it took Freeman 12 hours to complete a song, but his project has helped him to lessen that amount to eight hours a day.

Instead of one year, Freeman will continue his project for 30 days and is almost halfway there.

“I wanted to figure out a way without overextending my energy and cut it down to 30 days that way it’s concise and people can access it anytime,” states Freeman.

One unique aspect of Freeman’s blog is his use of collaborations, especially with Collantes.

“The collaborations are the best. It’s easy to come up with stuff myself, but it’s more difficult to perform with other people. The best one so far is with Kristina. She’s such a good songwriter, I can just sit back and let her do the songwriting and just record it.”

In fact, it was the song written by Collantes and recorded by Freeman that received the most fanfare on his site. It’s a track titled “Please More Scary,” and it easily takes you away with its wistful, ethereal quality.

“There’s a room in my house that’s just an arsenal of gear,” says Freeman, who plays and records all the instrumentation for each of his songs himself.

For now Freeman and Collantes will be using their sites not for fame, but simply for posterity.

Freeman says, “It will be nice to be done. I don’t think it will get me anywhere. It’s just a matter to establish a constant productivity or creativity in my life, which is kind of lacking. It’s kind of nice to go to the extreme and see how much I can actually do all at once.”