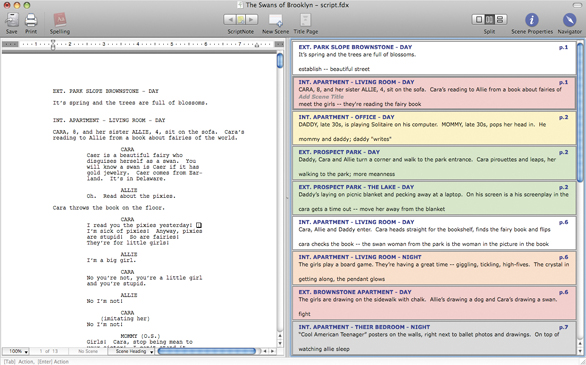 There have been a lot of pretenders to the throne over the years, but Final Draft remains the most intuitive, easy-to-use screenwriting software around. Its strong suit has always been that the program disappears and lets you get on with the writing. That said, it hasn’t offered many innovations over the years either. While Final Draft (finaldraft.com) has rested somewhat on its industry standard laurels, a few other programs out there have come up with some welcome ideas. After a somewhat buggy version 7, Final Draft is back with version 8, a solid update with some great new features.

Topping the list of additions is a long overdue Scene Navigator. With this floating window you can track up to nine categories of information, including scene title, page number, length, location and more. An additional program-wide color-coding option adds the ability to group scenes and track a character, storyline or scenes that need work.

Along with the Navigator, there is now a Scene Properties Inspector, in which you can assign specific information to each scene, which you can then choose to view in the Navigator. You can add a summary, outline story beats and assign a color and title.

The existing Index Card view has been improved. The cards are now double sided, allowing you to switch between viewing a scene and viewing its summary. Changes you make in this summary (i.e. a line of description) can easily be inserted directly into the script using the new “send to script” feature.

In addition, there is a new Scene View in which you can take a step back and look at your script in an outline-style scene by scene level. You can drag and drop multiple scenes, choose how much information to display and use the color coding to easily distinguish and track a specific element of your script.

The final change to version 8 is the new XML file format, which allows for a greater flexibility in importing and exporting of scripts, cutting down on annoying reformatting.

With version 8, Final Draft has made an update that was a long time coming, fulfilled some of its most wanting features and maintained its crown.

Whether you’re looking to become an art professional or you just like to experiment with Photoshop, sooner or later you’re going to find yourself limited by the use of a mouse. Increasingly, even work done in a traditional medium like paint will at some point need some digital treatment. Comic books are most often colored and lettered on computers. Even hand-drawn animation gets help from computers these days. A graphics tablet is an essential tool of the trade. You can’t do much better than the Wacom Intuos4 (wacom.com/intuos).

Wacom is the industry standard when it comes to graphics tablets. They make a wide array of models, from the top of the line Cintiq to the scaled down Bamboo. The Intuos is the perfect marriage of professional level equipment and affordability. It comes in four sizes: small, medium, large and extra large. With an 8.8-inch by 5.5-inch working area, the medium size fulfills most needs.

It features eight easily customizable ExpressKeys, as well as a touch ring with four further settings, and two side switches on the stylus. All of these make for a totally intuitive workflow that you set to how you work. These keys can be assigned to have global functions or to execute specific commands in a given application. Switching between brush sizes, layers, tools, zoom level and other Photoshop commands has never been easier.

You can customize the mapping of the tablet to the screen, but the default setting has the full tablet workspace mirroring your display. This saves all of that picking up and resetting of the mouse. Plus, it makes for more intuitive drawing. The sensitivity of the stylus is incredible and can mimic various drawing techniques faithfully.

It comes with 10 replacement nibs for various uses, plus a pen stand and a wireless mouse. The tablet is ambidextrous, so lefties can flip it around and not lose any usability. It is Mac and Windows compatible and comes with a software bundle, including specially designed brushes for Photoshop. You’ll wonder how you did without it.

Games & Gadgets
Gaming against sexual assault, with 'Decisions That Matter' and other video games
1,293 views