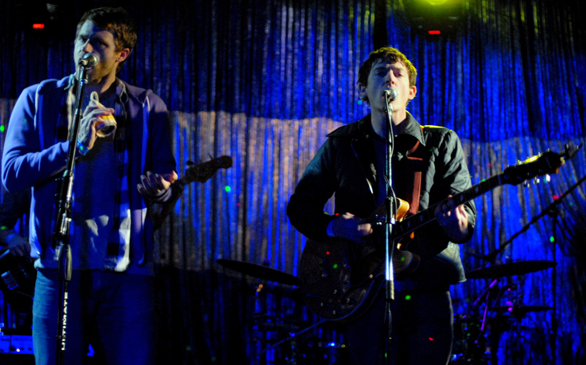 As they promote their upcoming album Alright Your Restless, Ages and Ages took the stage while receiving a warm welcome. Currently on a West Coast tour, the Portland-based group quickly energized the crowd with their enthusiasm and intensity. Much like they reiterate, they are not a cult, as the seven-member group stand tall on stage. They are a group of individuals eager to spread their music with the world.

Musically, Ages and Ages sound as if they channel the peace and love movement from the ’60s and combine present-day roots into their songs. Frontman Tim Perry led the group with his electric guitar riffs as every member provided backup vocals. The audience became the eighth member of the band by clapping along with the group. The entire performance involved crowd participation as everyone on the floor learned the lyrics. Singers Sarah Riddle and Kate O’Brien-Clarke balanced the vocal harmony while completing the soothing sounds they are known for. Each song included tranquil vibes that forced smiles and joy across the floor.

What separates Ages and Ages from other live acts is their carefree spirit and attitude. Their purpose is to entertain the masses and they excelled. Most importantly, they appear to be a family; their bond is instantly detected. Singing in unison sparked crowd reactions as the band shouted at the top of their lungs and often shifted from male to female vocals. The latest single, No Nostalgia, captures the essence of the group with its tambourines and keyboards mixing perfectly with guitars. With every member pouring their souls into microphones, they complete a perfect choir that invites everyone to participate at any degree. Ages and Ages played with raw passion and ambition. Their music included ingenuity that carried them through the entire performance.