Grace Potter and the Nocturnals: Melting Faces and Hearts 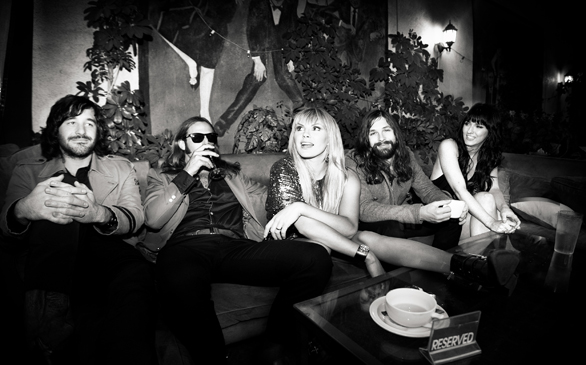 Grace Potter and the Nocturnals are no strangers to busy and bustling life on the road. As I spoke to Potter, she was just getting off a plane in Spokane, Wash., getting ready for yet another night on the road. Spokane may not be on every band’s tour, but Potter has an appreciation for the time spent outside the major venues in Los Angeles and New York.

“I always look forward to the cities that we stop through that most bands don’t get to play. We were just in Boise, Idaho, and now we’re in Spokane, Wash. There’s something about these smaller towns where people are in that shock and awe phase of going to see music.”

The mood and electricity from the audience are somehow different in cities where a major concert may not be an everyday occurrence.

“They really put it out there and enjoy, and they scream,” states Potter.

The band – made up of frontwoman Grace Potter, Matt Burr on drums, Scott Tournet on guitar, Catherine Popper on guitar and Benny Yurco on vocals – has been described as a genre-bending rock ’n’ roll homage to the past. On their self-titled record released last summer, they brought in some hip-hop, and Potter was excited to work with producer Mark Batson who is most known for his collaborations with big names such as Dr. Dre and Eminem.

“Working with Mark took me out of my shell and out of my comfort zone a little bit to work with someone with such a hip-hop background,” Potter shares. For the new record, “he brought in these beats with so much soul and character and sexuality.”

The band has recently played more than just in front of live audiences while on tour. They were on “The Tonight Show” and “Lopez Tonight.” And the appearances have been helping to bring their music into more homes.

“We play for groups of people every night on tour but to play one moment on TV, it can change hundreds of thousands of peoples’ minds about your music, and that’s pretty great to be able to touch so many people all at once.”

While home in Los Angeles, as well as on tour, the members of the band are working hard writing and perfecting new songs.

“‘Medicine’ was written by Scott, our guitarist, and our drummer Matt. They were in the basement jamming. They came up with the loop; they recorded it and sent it to me. I sat with it a couple days, and it just made sense,” she says.

But the writing process is not always the same.

“Sometimes I just lock myself in a room till something gets done.”

Nevertheless, the outcome is always music from the heart. Inspiration for new music comes to Potter in old and new artists and influences.

Making their own mark with their music, the group takes over the studio when it’s time to record.

“We come in hot, and I would feel bad for anyone who would have to share a studio with us. We do tend to take over.”

They prefer to work in more private studios when they can.

“Small studios that can feel more like home, more intimate down and dirty rock ’n’ roll style, you know? Less luxury and more work getting done.”

Fans of the band will not have to do without them after the tour comes to a close later this year.

Potter reveals, “We’ll probably end up in L.A. doing more TV spots and hopefully, roll right into the studio. Not to say we’re shooting to put out a new record anytime soon, we are still enjoying the youth of this one, but it’s always good to continue to make music.”

Anyone looking forward to seeing Grace Potter and the Nocturnals will be happy to hear that the shows are all about excitement. The band brings energy and in Potter’s words, “dynamics, melting faces and melting hearts all at once.”

Grace Potter and the Nocturnals perform Feb. 4 at the El Rey. For more information, visit gracepotter.com.