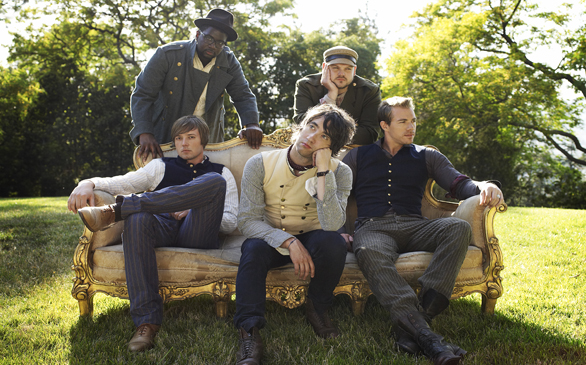 While I was waiting to speak with Tom Higgenson, frontman for the band Plain White T’s, I listened, again, to their latest album, Wonders of the Younger. I had been familiar with the band’s well-known love songs for quite some time, but I was happy to hear that there is even more to their sound and mood on this new release.

Higgenson, enthusiastic about the new feel of the album, begins, “Some people only know us from the songs on the radio, the slower, acoustic love songs feel, which is a big part of what we do, but there are a lot more faces to the band.”

“Especially with this album, we tried to make a roller coaster of songs,” he continues. “We wanted to make an album that really takes you somewhere you’ve never been before. It takes you on a bit of a journey. I think people will be very excited to hear what we’ve been doing.”

Higgenson and the band – consisting of Dave Tirio, Tim Lopez, De’Mar Hamilton and Mike Retondo – have always written from the heart. The songs come from “our personal experiences that we all bring to the table,” says Higgenson.

“‘Rhythm of Love’ and the song ‘Body Parts’ on the album, both that Tim Lopez sang, they are his true life experiences that he wrote about. For me, there are a couple really personal moments, like the song ‘Last Breath’ and ‘Our Song’ are both very personal to me.”

To connect with the audience, Higgenson says, “You have to write from the heart and tap into it; the more intimate you get, the more other people can connect to it.”

As a longtime admirer of Tim Burton, I was happy to learn that the band had been asked to include a song of theirs in the 2010 Alice in Wonderland compilation.

“I was in this wondrous, dreamy state for the songwriting, and it just so happened that the day after I wrote ‘Welcome to Mystery’ our label contacted us,” Higgenson says. “Tim Burton is a huge influence on us, always has been. So that was a huge honor to be part of something.”

From the first day of recording, Burton’s influence was ever-present. With full control over their own studio, the band made it into a creative wonderland and, of course, “There was an Edward Scissorhands action figure there from the beginning.”

As for now, the band heads out on tour this month.

“Last time we played in L.A. we played the House of Blues, so it will be great to get back here. It’s always good to have an excuse to get back to L.A.,” Higgenseon says.

Later in the year, the band hopes to expand their tour overseas.

Higgenson’s longtime collaborator, Ian Kirkpatrick, came on board as the album’s producer, and the band was able to take over Higgenson’s in-house studio.

“[Kirkpatrick] helped push the band to the next level I think,” he says. “He was great with the songs like ‘Cirque Dans La Rue.’”

The writing and recording processes melded into the production with a lot of on-the-spot trial and error throughout.

“Some of it worked, some of it didn’t, so we took it out. Everyone just came by every day and we went to work. It was a very nice and laid-back atmosphere,” reveals Higgenson.

That laid-back atmosphere and from-the-heart writing resulted in a new and exciting album that will bring new fans as well as keep everyone coming back for more.