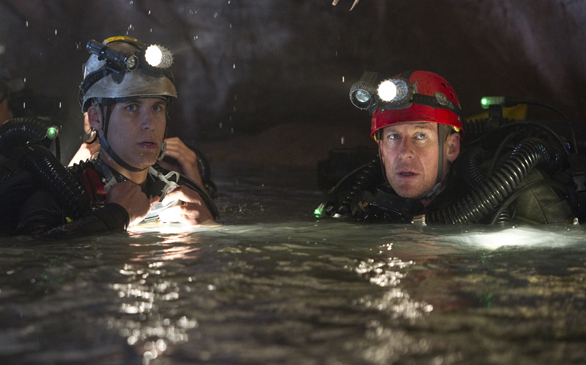 When it was announced that James Cameron – King of 3-D, King of Underwater Exploration, King of the World – was executive producing a 3-D thriller about a team of underwater cave divers trapped during a treacherous expedition to the largest and least accessible cave system on Earth, the news was greeted with intrigue and delight. After all, this is the man who spent days traveling to the bottom of the ocean in a high-tech sardine can so he could resurrect the Titanic, invented new underwater and 3-D technology and helmed The Abyss. He’s obviously a director with a great affinity for murky depths and epic filmmaking; knowing he was putting his considerable weight behind Sanctum instantly legitimized it.

The film was born from co-writer Andrew Wight’s own near-death experience. He was leading a diving expedition miles into a system of underwater caves in Australia when a freak storm collapsed the entrance and he had to find another way out. After Cameron heard the tale from director Alister Grierson on the set of Avatar, he stepped into the EP role, guaranteeing the film would make it onto the big screen.

Starring Richard Roxburgh (Moulin Rouge!, Van Helsing) as Frank, the group’s gruff leader, Rhys Wakefield (who left quite an impression in the little-seen gem The Black Balloon) as his sulking prodigal son Josh and Ioan Gruffudd (Fantastic Four) as the expedition’s daredevil millionaire benefactor, you can’t help but feel that, as a narrative, this saga would be best served as an astonishing story told breathlessly over one-too-many drinks.

On the big screen, Sanctum suffers from many problems, not the least of which is laughably bad dialogue, a largely unlikeable case of ensemble characters that whittles away its best member, the outstanding Aussie actor Dan Wyllie (Muriel’s Wedding, Romper Stomper, Animal Kingdom), far too early and a tenuous emotional core based around the idea of father-son reconciliation but feels forced and out of place. Wallowing in the dank caves should be claustrophobic and harrowing, instead it’s merely monotonous, visually and emotionally, as the group’s numbers dwindle with varying levels of gore (Who wants to see someone’s scalp slowly peeled off in 3-D?) and the film marches, slowly and predictably, toward a shockingly glib ending.