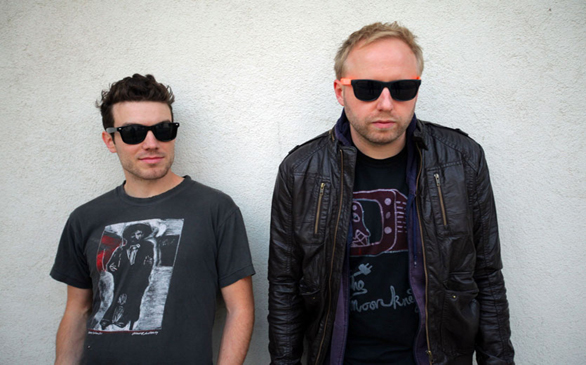 Kid Infinity stimulates your senses with a 3-D show Feb. 5.

Using technology originally intended for Michael Jackson’s farewell tour, L.A. electro-punk/hip-hop duo Kid Infinity (kidinfinity.com) presents a 3-D concert at the Alexandria Hotel on Feb. 5. This isn’t 3-D like you’ve experienced it before; this is a fully immersive stage show where the band performs in front of a screen and is able to build a virtual stage around themselves and the audience.

The animations are customized to the music and objects such as cubes pulsate, spin next to you, float above you and come at you to the tempo of the music. This type of 3-D show has never before been presented in a concert environment. The 87 Stick Up Kids and Captain Ahab open the show with non-3-D performances.

Kings of Leon, Arcade Fire and Kanye West are the headliners of this year’s Coachella Valley Music and Arts Festival. Kings of Leon perform on Friday, April 15, along with an impressive roster that includes Cee Lo Green, the Black Keys, Interpol, Ozomatli, the Chemical Brothers, Robyn, Sasha, Brandon Flowers and Caifanes. The Kills, Animal Collective, Bright Eyes, Mumford & Sons, Fedde Le Grand, Gogol Bordello, Wire and Big Audio Dynamite are some of the acts leading up to Saturday’s Arcade Fire show, and the whole shebang closes out on Sunday with the Strokes, Duran Duran, PJ Harvey, Wiz Khalifa, Jimmy Eat World, Nas & Damian Marley, CSS, She Wants Revenge and the Bloody Beetroots among those warming up the crowd for West’s closer. Find the full listing of performers and ticket and camping pass information at coachella.com.

The Band Perry Double-dog Dares You

Grammy-winning sibling trio the Band Perry has teamed with Purina dog food to give fans a chance to win some money and also help out the canine community. The group’s members are appearing in promotional spots asking fans for charitable ideas like “I double-dog dare you to refurbish my city’s animal shelter.” Three ideas will come to fruition, and the person who submitted the “dare” will get $5,000 and a year’s supply of Purina Dog Chow.

Kimberly, Neil and Reid Perry are all dog lovers, and their pets appear alongside them in the commercials for the contest. The band doesn’t have a local appearance scheduled until their June 4 show with Tim McGraw in San Bernardino. Submit your dare at daredogchow.com.

Iconic Grammy-winning rock guitarist Slash has partnered with Michael Williams and Rob Eric of Scout Productions to form Slasher Films with the intent of making low-to-medium budget original character-driven horror films reminiscent of the visionary horror fare of the late 1970s and ’80s.

“I’m a lifelong horror movie fan and horror movie critic,” says Slash. “I’m from a generation that appreciates the great horror movies of the ’60s, ’70s and ’80s that really scared the hell out of you.”

With that in mind, Slasher Films plans to focus on supernatural, psychological thrillers and terrifying horror as they begin producing one or two movies a year starting this year. In the meantime, Slash, who’s scheduled to be honored with a star on the Hollywood Walk of Fame this year, is on tour as a solo act and with Ozzy Osbourne.

L.A. progressive hard rock/metal band Clandestine is about to release a new album called The Invalid. Clandestine is fronted by singer June Park who wields an impressive and otherworldly voice (and equally impressive purple hair) and their music draws comparisons to that of other female-fronted bands like Lacuna Coil and Evanescence as well as Dream Theater, Rush and Tool. The Invalid is produced by Sylvia Massey (Tool, System of a Down) and drops on the Nightmare Records label on Feb. 15.