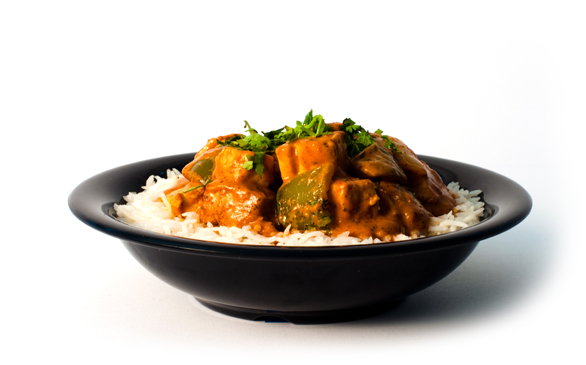 I just ate at this little spot called Saffron located in Beverly Hills. The concept behind the restaurant is simply stated in their slogan: Fast. Fresh. Indian. I didn’t know what to expect because it is a fast-food concept for Indian food. I’m not saying that you can’t get great food for cheap, but Indian really is a specialty that you would not consider for fast food. I immediately wanted to rethink why I chose this place and I was afraid I was in for bland, greasy and mediocre food. To my surprise, it was absolutely delicious!

Owners Peter Stris and his wife Radha Pathak were searching for local Indian cuisine that was not only delicious but also affordable. They were unable to find a spot that satisfied what they were yearning for. Five years ago, they partnered up with Ben Karlin and started putting together a plan. Their first Saffron opened up downtown in the financial district two years ago. They had to come up with price points that would drive business in but also create good food.

He continues, “We spent awhile looking for someone who was really talented and that could develop authentic recipes with a limited menu and offer healthier options.”

Through family and friend connections, they were able to bring in Bhupender Sing, a well-renowned Indian chef, as their executive chef.

“He is such an artist, and it was definitely hard to get him to stay focused on the limited menu that’s restricted to chicken and vegetarian dishes,” Stris chuckles.

Not only did they thrive at that location, they just opened their second located on Beverly Drive in Beverly Hills.

The menu at the Beverly Hills location is a little more expansive, and the eatery is open daily from 11 a.m. to 10 p.m., as opposed to their downtown location, which is only open for lunch on weekdays. This was a bit of a larger venture on everyone’s part.

There are eight plates you can choose from, ranging from a traditional Tikka Masala and Chicken Curry to Aloo Gobi and Tofu Tikka Masala. You can select either the combo plate, which offers two main dishes and basmati rice, or a bowl of any one entrée over rice.

They now offer a Tandoori chicken salad for those seeking no carbohydrates or a Tandoori chicken platter, which is only offered at this location. For people with sensitive stomachs, most of their food is gluten free except for the obvious and scrumptious naan bread, offered in both plain and garlic. They make everything fresh, and you can watch them literally making the naan bread constantly throughout the night.

They have a neat concept with a house-made chutney bar, including favorites such as mint, tamarind, mango and chili chutneys. The chili chutney almost singed my taste buds off, but then again I can barely do spice!

“Everything is made pretty mild so you can add different chutneys to add spice, because we didn’t want to scare people away from trying Indian food,” states Stris.

Aside from the Tandoori chicken being so tender, moist and flavorful, they have a mango lassi that is off the charts. As my friend guzzles it down and comments on how good it is, Stris beams, “That’s my mother-in-law’s recipe!”

There are also side dishes such as samosas and Cucumber Raita. For a limited menu, there are more than enough options to choose from.

“My dream is to remove some things from the menu because we want to keep it simple,” Stris expresses eagerly.

They want to continue to expand and grow and build more locations from the Westside to South Bay.

“Our Yelpers have been outrageously good to us, which is great,” smiles Stris.

I am looking forward to heading back to this location to eat, and I’m interested to see where they go from here. It is fast, delicious and flavorful food that won’t break your wallet.

Budget
The ECOLunchbox is an eco-friendly food storage solution for people on the go
1,871 views

Budget
Mexicali Taco & Co.: Everything But the Tacos
4,162 views

Budget
Tom Bergin's: "Where Everybody Knows Your Name"
2,497 views